Gujarat businessman’s massive 600 cars Diwali Bonus: Here’s the list of cars gifted by Savji to his employees till date

Renowned business tycoon Savji Dholakia has done it yet again! The diamond trader and the owner of Shri Hari Krishna Exports has gifted 600 cars as Diwali bonus to his employees. Here we have compiled all cars gifted by Savji to his employees till date. 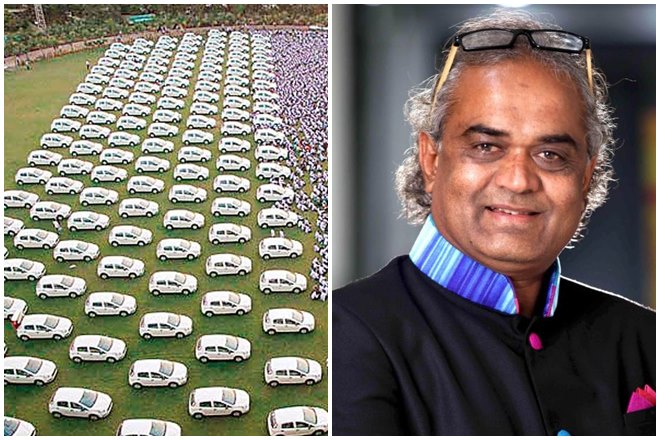 Savji Dholakia, the renowned diamond trader from Gujarat is into the headlines once again for an obvious reason. The owner of Shri Hari Krishna Exports has gifted 600 cars to his employees on the occasion of Diwali. This is not the first time that Savji has gifted such a massive Diwali bonus to his employees. The Gujarat businessman started appearing in the news and gathering attention since the year 2016. Savji says that he loves gifting cars to his employees and by getting such a gift, an employee feels motivated and at the same time, feels a lot more confident and looks for a long association with the company. Here is what all cars Savji has gifted to his employees till date and how many employees have got lucky till date.

This Diwali, Savji Dholakia has gifted 600 cars to his employees as Diwali bonus. 1,500 employees have been selected under the loyalty programme by the company out of which 600 have opted for cars while 900 will be handed over fixed deposit certificates. Dholakia said that for the first time, the employees of his company will be receiving certificates and car keys from the hands of the PM. According to Dholakiya, the company will pay gifts worth close to Rs 50 crore under the loyalty programme this year.

Last month, Dholakia gifted three Mercedes-Benz GLS SUVs to his employees upon their completion of 25 years of association with the company. The on road price of the Mercedes Benz GLS SUV in Surat is presently close to Rs 1 crore. The Mercedes-Benz GLS 350d gifted by Savji Dholakia to his employees gets features like panoramic sunroof, three-zone climate control system, rear seat entertainment system, full LED lights and more.

Savji Dholakia gifted 1200 units of the Datsun redi-GO cars to his employees out of which 650 cars were delivered by Datsun on a single day. The brand new cars were gifted to those employees who had not received any incentives in the past year. However, there is a catch to it. All cars were purchased on downpayment by the company with a five year EMI plan that was to be fulfilled by the company. In case an employee parts ways with the company, the remaining EMIs was to be submitted by him. The Datsun redi-GO was also a part of the 1260 cars that Savji gifted to his employees on Diwali in 2016.

Savji Dholakiya gifted 1260 cars to his employees on Diwali 2016 and the Maruti Suzuki Alto constituted the major part of the fleet. Apart from gifting 1260 cars, the business tycoon also 400 flats to his employees as Diwali bonus. The company had revealed that it has offered Diwali bonus worth Rs 51 crores to the employees in the said year.

On the occasion of Diwali in the year 2014, Savji Dholakiya gifted 500 Fiat Punto cars to his employees. A total of close to 1200 employees were selected under the loyalty programme under which they were asked to choose between a brand new car, jewellery and a flat. While gifting Diwali bonus to his workers, Savji that all his dreams have come true through his workers. He also added that his company is the first in the world to offer Rs 3.60 lakh worth incentives to each of 1200 diamond workers.

Also Read: Five Hot cars, SUVs launching after Diwali that you should wait for: Mahindra XUV700 to Honda Civic