Government finally wakes up: Sets a realistic goal of 30% electric vehicles by 2030 from existing 100% target

EESL had procured 10,000 e-vehicles last year and is likely to issue a new tender in March 2018 for 10,000 more e-vehicles to cater to the growing demand. With these 20,000 electric cars, India is expected to save over 5 crore litres of fuel every year leading to a reduction of over 5.6 lakh tonnes of annual CO2 emission claims Indian Government. 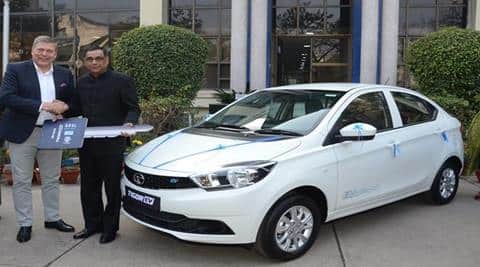 Going a step further towards its dream of electric mobility, Ministry of Power has launched the National E-Mobility programme here in India and rolled out electric cars fleet including Mahindra e-Verito sedan and Tata Tigor EV as a part of this programme. These electric cars will replace government’s existing fleet of petrol and diesel powered vehicles. India’s National E-mobility Programme aims to provide an impetus to the entire e-mobility ecosystem that includes electric vehicle manufacturers, charging infrastructure development companies, fleet operators, service providers, etc. The Government also said that it is looking at charging infrastructure and policy framework to have 30% of vehicles in India as electric vehicles.

This comes weeks after Niti Aayog and Nitin Gadkari announced that India does not need an EV policy. Amitabh Kant, CEO, Niti Aayog was quoted saying, “What we need is just action plans” backing Nitin Gadkari’s comment of “there is no need for any policy now,” leaving automakers in a fix once again.

State-run Energy Efficiency Services Limited (EESL) is responsible for procuring electric vehicles for the Government and says that this programme will be implemented by which we will aggregate demand by procuring electric vehicles in bulk to get economies of scale. Currently, Government has procured Tata Tigor and Mahindra e-Verito electric cars in bulk and will replace the existing fleet of petrol and diesel vehicles. EESL had procured 10,000 e-vehicles last year and is likely to issue a new tender in March 2018 for 10,000 more e-vehicles to cater to the growing demand. With these 20,000 electric cars, India is expected to save over 5 crore litres of fuel every year leading to a reduction of over 5.6 lakh tonnes of annual CO2 emission claims Indian Government.

R K Singh, Union Minister of State (IC) Power and New & Renewable Energy, said that it makes sense from point of view of environment and economy both. The per kilometre cost for an electric car is just 85 paisa against Rs 6.5 for normal cars and these would also help us achieve autonomy from expensive petroleum imports, he added.
Also read: Is it really Mahindra vs Tata Motors in Indian electric car space? Not really

Further emphasising, “The future is electric,” the Minister said that in most part of the developed world cooking is electric, and many countries have announced dates to phase out their diesel vehicles. Even our IIT teams have developed an electric cooking system and we are going to go electric and go green. He invited the industry to be part of India’s growth story, and said: “My message to industry is, come and invest in manufacturing of e-vehicles and batteries”.

Power Secretary, Ajay Kumar Bhalla also confirmed that the Government is focusing on creating charging infrastructure and policy framework so that by 2030 more than 30% of vehicles are electric vehicles. He also confirmed that licensing for establishing charging infrastructure in India would not be required and the tariff for this would be less than Rs 6.

With various stakeholders involved, automakers are still in a fix about India’s EV dream and have been able to invest and dedicate 100 per cent towards electric mobility. Automakers like Mahindra and Tata Motors have started to invest heavily to develop electric cars in India. The first tender that was awarded to Tata Motors and Mahindra also saw Japanese automaker Nissan taking part. It is expected that in the second round of e-Vehicles procurement by EESL more automakers are likely to bid aggressively. Indian automobile industry is controlled by Ministry of Road Transport, Ministry of Heavy Industry, Ministry of Finance, GST Council and also has to deal with ARAI and NGT from time-to-time. With EVs coming in, Ministry of Power will also have a crucial say in charging infrastructure.

We believe it’s high time for Government to start a separate ministry for easy coordination among various stakeholders, Aviation has a separate ministry, Automobile sector which has lakhs of direct and indirect employment and is a key contributor to India’s GDP deserves a separate ministry for easy overall operations. Society of Indian Automobile Manufacturers (SIAM), had earlier confirmed its desire that 40% of all new vehicle sales in the country will be all-electric vehicles by 2030. All-new vehicle sales to be 100% EVs is realistic only by 2047 believes SIAM.