The Tata Punch is a 5-star safety-rated car by Global NCAP with scorecard of 16.45 points out of a total of 17 for adults. 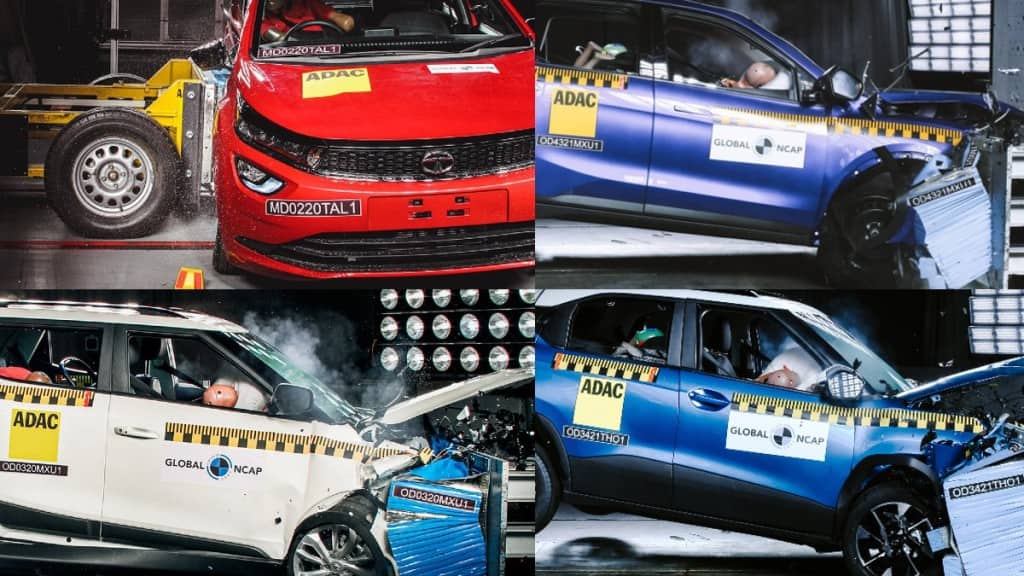 India is betting big on safety where automakers and buyers both, are beginning to lean towards safety features more than mere creature comforts. Let’s take a look at 10 of the top-rated and safest cars available in India as per the latest rating by Global NCAP (New Car Assessment Programme).

The Mahindra XUV300 scored a full 5 stars by Global NCAP. It Scored16.42 points out of 17 for adult safety occupancy, the XUV300 also gets a rating of five stars. It also scores 37.44 points out of 49 for child safety, earning it four stars. The model of the XUV300 that was tested had two front airbags and was crash tested at a speed of 64 km/h. According to the rating agency, the body shell remained stable with the front passenger getting good overall protection.

‘The driver sees adequate protection in the chest and tibia region’. The top-spec XUV300, too, comes with a fair number of safety equipment including ABS with EBD, front fog lamps, seatbelt pretensioners, rear parking sensors and reverse camera, auto-dimming IRVM, auto headlamps, rain sensing wipers, hill start assist and corner braking control, among a long list. The XUV300 comes with a choice of a petrol or diesel engine.

Tata Altroz is a proud owner of 5 stars by Global NCAP as well with a score of 16.13 points out of a maximum of 17. For child occupancy, the Altroz scores a lower 29 points out of 49 but still a modest three stars. At a crash speed test of 64 km/h, the Altroz’s body shell remained stable and both the driver and passenger had adequate protection for the chest and tibias. The model tested comes equipped with dual front airbags, four-channel ABS, seatbelt pretensioners and ISOFIX child seat anchors.

The Mahindra XUV700 scored full five stars in adult occupancy and a score of 16.03 points out of 17. In total, the SUV scored 41.66 points out of 49. It bagged 4 stars in the child safety department. The tested model of the Mahindra XUV700 comes with dual airbags; however, the fully-loaded top-spec variant comes with seven airbags including curtain airbags and one for the driver’s knees. As per Global NCAP, the Mahindra XUV700 was tested at 64 km/h and its body shell remained stable with the ability to withstand further loadings and the overall driver and passenger safety remained good with adequate protection to the tibias.

The Mahindra XUV700 top-spec variant gets a host of safety tech including ADAS, i.e., Advanced Driver Assistance System. This system enables autonomous abilities such as automatic emergency braking, front collision warning, lane keep assist, smart pilot assist, and driver drowsiness detection, among others. The Mahindra XUV700 gets a choice of both a petrol and diesel engine. The 2-litre turbo-petrol produces 197 hp of power and 380 Nm of torque while the 2.2-litre diesel comes in two states of tune – 152 hp/360 Nm and a second 182 hp/420 Nm of torque.

The last Indian car on this list is the Tata Nexon with a full 5 star safety rating by Global NCAP and with a score of16.06 points. As for child safety, the mini SUV scores three stars with 25 points out of the 49-point maximum. Again, the body shell remained stable in its 64 km/h crash test and both the driver and the passenger received adequate protection in the chest and the tibias. The model tested had dual front airbags, ISOFIX anchors, seatbelt pretensioners and four-channel ABS.

The top-spec variants of the Nexon, however, also get a full suite of electronic stability programmes like traction control, roll-over mitigation, hill hold and emergency brake assist along with the iRA-connected car tech which adds a crash alert and diagnostics report. Powering the Tata Nexon is a choice between a petrol and a diesel engine, both turbocharged.

The Toyota Urban Cruiser has a respectable 4 star safety rating from global NCAP with a score of 13.52 points out of the maximum 17. The model was tested at 64 km/h and while the passenger received good protection overall, the right knee received only marginal protection. The driver on the other hand receives adequate protection in the chest and tibias but only marginal protection in the knees. Child protection is rated three stars with a total score of 36.68 km/h. The model of the Urban Cruiser that was tested receives dual airbags, ABS with EBD, seatbelt pretensioners and ISOFIX child seat anchors as standard. The body shell on impact remained stable and was rated as being capable of further loadings. The Urban Cruiser still comes with a decent suite of safety tech such as high-speed warning buzzer, hill hold, speed sensitive door locks, day and night IRVM, reverse parking camera and others.

The first sedan to make its way to this coveted list is the Honda city with a 4 star rating. It holds a total score of 12.03 out of 17 points where the test data shows that the driver receives marginal protection to the chest and knees and adequate protection to the right tibia and feet. Child safety is rated at 4 stars scoring 38.27 points out 49. The City was tested at the standard 64 km/h and the body shell was rated as unstable and incapable of further loadings. The model was tested with two airbags, ISOFIX child seat anchors and ABS with EBD which comes standard. Other safety tech includes day and night IVRM, high-speed alert, door ajar warning and rear parking sensors with reverse camera.

The Honda Jazz secured a four-star rating and a total score of 13.89 out of 17 points. In terms of child protection, the Jazz was awarded 31.54 points out of 49. Although it does not come with ISOFIX anchors, both the 1-and-a-half-year-old and 3-year-old child seats were installed using the adult seatbelts and allow for a safety rating of three stars. For adult occupants, the passenger sees an overall good protection adequate protection to the left tibia and only marginal protection to both knees.

The tested Honda Jazz gets dual airbags and ABS with EBD. As per the testing agency, The body shell remained stable in the 64 km/h crash and was capable of further loadings. The Honda Jazz gets a few more safety features such as a speed-sensing door lock, seatbelt reminders, high-speed alert and rear parking sensors with a multiview reverse camera.