During the lifecycles of the products, Ford Motor Company and Volkswagen expect to produce up to a combined 8 million of the three commercial vehicles included in the commercial relationship. 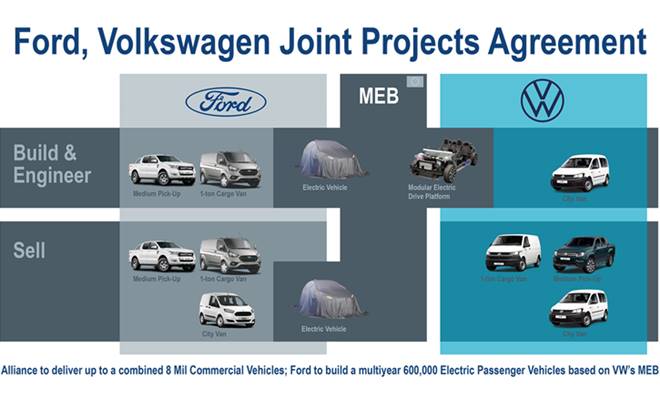 Ford Motor Company and Volkswagen AG have signed agreements expanding their global alliance to midsize pickup trucks and commercial and electric vehicles. Ford and Volkswagen had first announced their plans for the agreement in July last year. The companies say that the alliance will assist in improving ownership experiences for current and new customers by quicker and better innovations in vehicle offerings, the use of relevant new technologies, delivering better utility and offering a wider choice.

– Build a medium-size pickup truck. It will be engineered and built by Ford and sold by Volkswagen as the Amarok starting 2022 under Volkswagen Commercial Vehicles lineup

– Strengthen commercial-vehicle businesses of both companies by 2021 with the rollout of a city delivery van based on the latest Caddy model. This will be developed and built by Volkswagen Commercial Vehicles and later on, a 1-tonne cargo van developed by Ford.

Ford aims to deliver 6 lakh electric vehicles based on the MEB architecture over a span of several years starting 2023. The vehicle will be designed and engineered by Ford in Cologne-Merkenich and will be added to Ford’s EV lineup of its own all-electric Mustang Mach-E which will be introduced in 2021.

Additionally, the two work with Argo AI to develop autonomous-vehicle businesses based on Argo AI’s self-driving technology. Volkswagen recently closed its previously announced investment in Argo AI (a Pittsburgh-based company in which Ford already had ownership and development interests).

Ford CEO Jim Hackett said, “This creates a huge opportunity to innovate and solve many of the world’s transportation challenges and deliver extraordinary benefits to customers – even as companies need to be selective about how they use their cash.”