Renault Captur vs 2017 Maruti Suzuki S-Cross vs Hyundai Creta: Can the Creta take on these formidable competitors set to be unveiled this month?

The Hyundai Creta has ruled the roost in its segment since its launch will the arrival of two new competitors affect the Creta’s dream run? 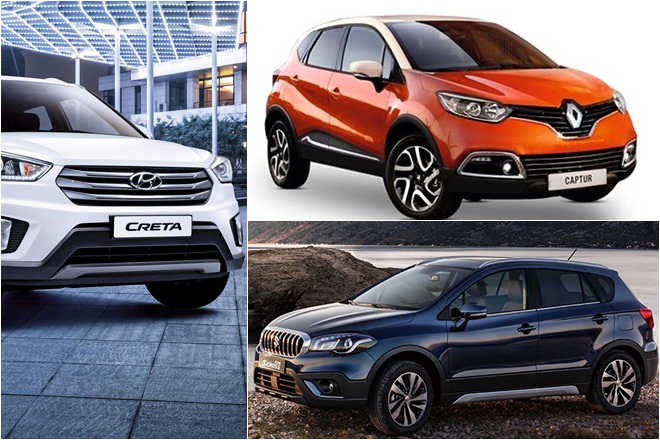 The Hyundai Creta has had a dream run since its launch, competing with the dated Duster and the Maruti Suzuki S-Cross, which didn’t get much in the form of a public response. This month, however, things are going to take a drastic change with Renault entering the ring with their upcoming Captur SUV and 2017 Maruti Suzuki S-Cross getting a much-needed mid-term update. Both of which fit perfectly in the Cretac’s 8-15 lakh segment, both are set to be unveiled at the end of the month. Question is will these two new wild cards have enough of a value proposition for people to move away from the safe-bet on the Creta.

In terms of design, the Captur has the freshest of the three. Considering the Creta that was launched back in 2014, and has just received a few additional trims and an option black-roof as add-ons over the years. Meanwhile, the S-cross gets a design refresh while maintaining roughly the same dimensions.

When it was launched the Creta took on the likes of the Duster and the S-cross at which point, it outclassed the competition on almost every score. However, over the last two years with more and more impressive design entering the market, the Creta, which has just received some additional features and a blacked out roof seems like rather bland in comparison. Although it can still go toe-to-toe in terms of features with even the latest offerings.

The Captur’s well-rounded exteriors are kind of a modern re-take of the Dusters design. The sculpted bonnet ends in a deep set grille, flanked by C-shaped DRLs and accented by the black skid-plates which run along the length of the car. The 17-inch alloy wheels are at par with those on the Creta. In terms of the rear split LED tail-lamps as accents.

Although the basic shape and design remains the same, Maruti Suzuki has given their premium crossover a major facelift. Highlights being the new chrome grille, new headlamps a redesigned hood and a new front bumper and tail-lights. The S-Cross facelift will also get a new colour in the form of Nexa’s signature Stargaze Blue which will replace the Urban blue on the S-Cross. Also included on the list are LED projectors instead of HID projectors. In addition, there are also LED DRLs and the 215mm section tyres replace the 205s which will possibly help to evade the torque steer problem.

The well-built interiors on the Creta along with the barrage of kit that it received in 2015, has helped see it through the years. The recent addition of Apple Carplay and Android Auto has only sweetened the deal.

If the international Captur, is to be taken as a yardstick, it remains a 5-seater SUV like its sibling. It has a 437-litre boot, which is smaller than both the Duster and the Creta. The rear bench is expected to feature a 60:40 split for a quick increase in storage. Expect the standard list of features, like climate control and a touchscreen infotainment system and optional leather upholstery. Dual airbags, ABS and EBD can also be expected as standard. However, the Captur is expected to be the longest and widest of the three and sport the longest wheelbase which indicates towards it having the most spacious.

It is unclear as to whether there will be significant changes to the inside of the S-cross. Which in no way lacked in kit. The standard touchscreen will remain, with the possible addition of Android Auto and Apple Car play.

The Creta has the most in terms of engine options to meet your needs, with two diesel engines and one petrol engine on offer with power figures ranging from 89 hp to 130 hp. This also allows the Creta some very flexible price tags across the range which make it easier for prospective buyers to fit their budget.

The Captur is expected to share its powertrain with it’s Dacia cousin the Duster. Which means that one can expect the 1.5-litre diesel and 1.5-litre petrol on offer. The diesel version, like the Duster, might be offered in two states of tune 83 hp/200 Nm and 105 hp/142 Nm mated to a 6-speed manual gearbox. An optional CVT would not be out of place either.

Maruti Suzuki has decided to do away with the 1.6-litre engine, and offer the S-Cross with only the 1.3-litre 88 hp/200 Nm torque diesel. There is, however, a minor chance that Maruti might include it’s SHVS technology with the new S-Cross to boost sales.

Now while we only know the official prices for the Creta which ranges between Rs 9 lakh and  Rs 14 lakh depending on the trim and state of tune. Renault Captur, on the other hand, is likely to be in a more or less similar in terms of price. We expect that the S-Cross will be sold at the same price with some minor price revisions but will continue in the 8-10 lakh bracket of the outgoing model.