Kia EV6 vs Hyundai Ioniq 5 comparison between price, design, features, range, specifications, charging, and more. Here are all the details you need to know about the Kia and Hyundai electric crossovers. 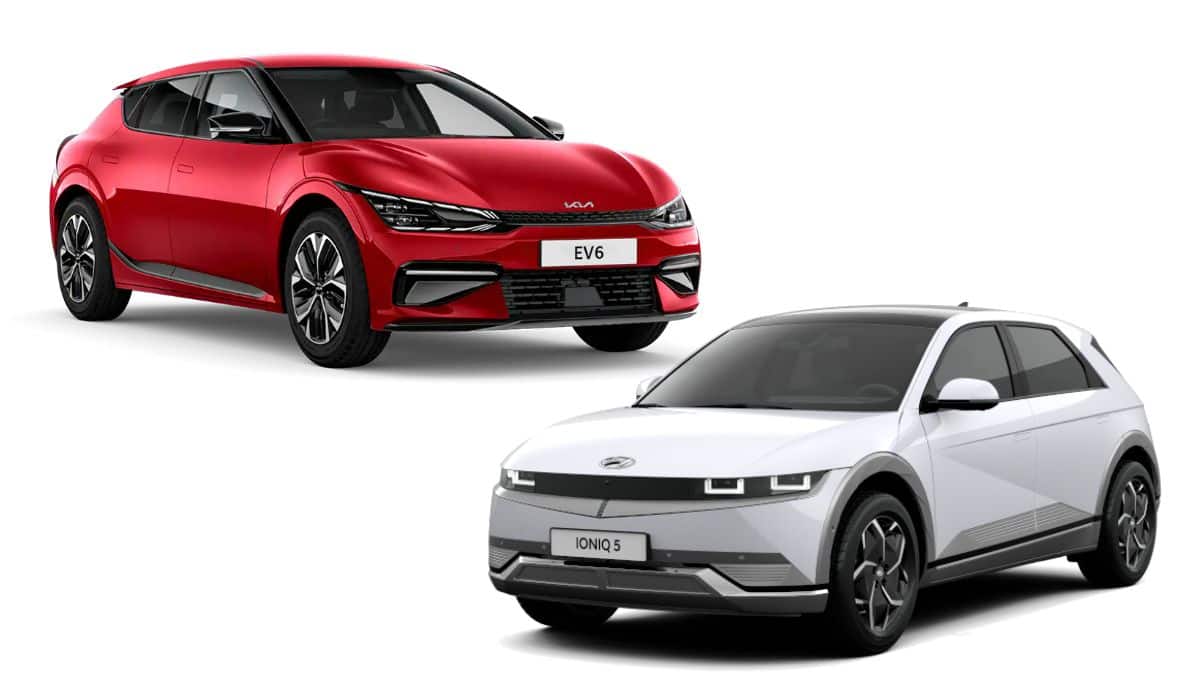 The recently-launched Kia EV6 was one of the most futuristic-looking cars to go on sale in India, keeping in mind that it’s an electric crossover. The EV6 was launched days after BMW brought in its electric offering, the i4, and in a matter of time, Hyundai will bring in its newest electric offering for India, the Ioniq 5.

Based on the same electric platform and sharing many features, we have pitted the EV6 against the upcoming Ioniq 5, though there will be a price difference between the two as Hyundai will be assembling their electric vehicle, unlike Kia entering the Indian market via the CBU route.

Let’s compare the EV6 vs Ioniq 5 in terms of pricing, design, features, and specifications.

The Kia EV6 is priced at Rs 59.95 lakh (ex-showroom) for the GT-Line RWD, and the higher-spec GT-Line AWD version is available at Rs 64.95 lakh. Only 100 units of the EV6 are initially allotted to India, however, all are sold out. One of the primary reasons for Kia’s price is due to the import duties on cars. Due to the high demand, Kia has revealed that they will bring in more units though this will take some time as the deliveries of the first batch will start in September.

The Kia EV6 is based on the carmaker’s E-GMP Platform, which is also the base for the Hyundai Ioniq 5. The Kia features a low-slung stance with a sporty design with its upswept headlights, large alloy wheels, a narrow faux grille between the headlights and a larger actual air intake at the lower half of the front bumper to cool the batteries.

The Hyundai Ioniq 5 also features a low slung design, however, it opts for a more squarish design. Instead of the swept-back headlights and a sculpted design like the EV6, the Ioniq 5 carries forward dual rectangular headlight and tail lamp design, distinguishing itself clearly from the EV6.

Both cars feature full LED lamps front and rear, 19-inch wheels that are closed off for better aerodynamics, and floor-mounted batteries for a lower centre of gravity and better handling.  Both electric crossovers, the EV6 and the Ioniq 5 have flush-mounted door handles to reduce drag to the maximum and offer the longest range.

Inside, the Kia EV6 is loaded to the brim with features such as ventilated seats, and two large 12.3-inch curved displays — one for the infotainment system and the other for the instrument cluster. It is also equipped with HUD, a premium sound system, smartphone connectivity with navigation and a 520-litre boot. In terms of safety, the EV6 gets 8 airbags, ABS, EBD, traction control, forward collision warning, blind-spot detection, dynamic cruise control, lane change assist, and a 360-degree camera amongst others.

We can expect most, if not all of these features to make their way into the Hyundai Ioniq 5 in India. In the global markets, the Ioniq 5 gets Autonomous Level 2 driving, 7 airbags, smart cruise control, lane keep assist, forward collision warning, blind-spot detection, reverse parking collision avoidance system, remote parking and much more. It will be interesting to see which of these features make it to India.

The Kia EV6 in India comes with a 77.4 kWh battery pack with a choice of either a single motor (RWD) or dual motors (AWD). The former makes 229 bhp and 350 Nm of peak torque while the latter makes 320 bhp and 605 Nm of torque. Globally, the EV6 is also offered with a smaller, 58 kWh battery pack as well.

Coming to the Hyundai Ioniq 5, the carmaker offers two battery sizes again, a 72.6 kWh battery and a smaller 58 kWh battery pack, the latter identical to the EV6. Hyundai claims that with a 350 kW DC station, the Ioniq 5 takes 18 minutes to charge from 10 to 80 per cent and 1 hour with a 50 kW DC station. Hyundai again claims similar power and acceleration figures to the EV6 but it will be interesting to see which of the four variants – Standard Range 2WD, Standard Range 4WD, Long Range 2WD, and Long Range 4WD – the carmaker decides to launch here.