Elon Musk plans to put a Tesla Roadster in a SpaceX rocket to Mars! Check out how

Another little detail to make the fans to cheer wilder is the Tesla Roadster will be playing David Bowie’s evergreen classic Space Oddity when it approaches the Red Planet. 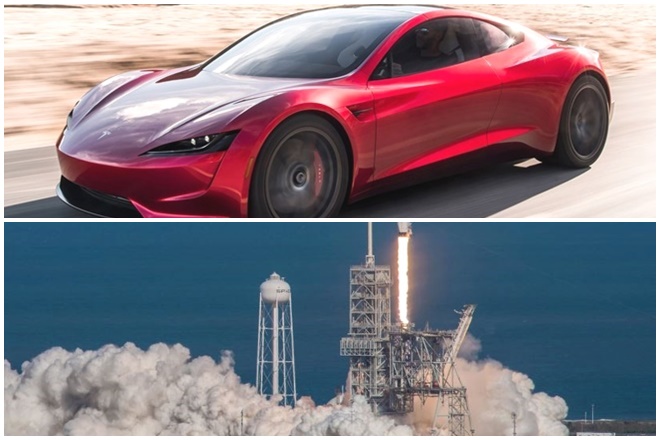 Tesla Roadster was much of an eyebrow raiser when it was rolled out in a surprise unveil during the showcasing of the Semi Truck. The numbers sounded crazy – 0-100 in 1.9 seconds! Quicker acceleration than a Formula 1 car! Top speed, Elon Musk claims, will be over 250 mph (400 km/h) crossing into the territory of one of the fastest cars on the planet like Bugatti Chiron and Koenigsegg Agera. Now though, the Roadster is about to be involved into something that will make jaws drop all across the world. In the latest tweet, Musk said that Falcon Heavy will launch soon and ‘Payload will be my midnight cherry Tesla Roadster’! The car will likely play along with the spiders from Mars for billions of years if it does not blow up during ascent.

Falcon Heavy to launch next month from Apollo 11 pad at the Cape. Will have double thrust of next largest rocket. Guaranteed to be exciting, one way or another.

Another little detail to make the fans cheer wilder is that the red car will be playing David Bowie’s evergreen classic Space Oddity when it approaches the Red Planet. Musk wrote that the Falcon Heavy would be launched next month with the aim of putting its payload in orbit around Mars. It will, Musk predicted, “be in deep space for a billion years or so if it doesn’t blow up on the ascent.”

Payload will be my midnight cherry Tesla Roadster playing Space Oddity. Destination is Mars orbit. Will be in deep space for a billion years or so if it doesn’t blow up on ascent.

As has happened in the past, the launch of the Falcon Heavy may be moved ahead. SpaceX originally hoped to carry out the first Falcon Heavy test launch years ago. And Musk said earlier this year he was targeting November. However, not all deadlines have been moved ahead. Musk had promised on 10 March this year that his company would build the world’s biggest battery in Australia within 100 days, or it would not charge for it.

Tesla indeed delivered in less than 100 days to build the biggest lithium-ion battery in the world in an effort to help South Australia with its crippling energy problems.

Also read: Tesla’s Roadster is a convertible that accelerates faster than an F1 car: Here’s everything you need to know!

The ambition of putting a Roadster into Mars’ orbit would require a bigger rocket, which SpaceX calls the BFR, or Big Falcon Rocket, and is nicknamed with love – the “Big F–king Rocket.” SpaceX plans to start building the first of those by the middle of next year, Musk said in late September.

While traditional rockets can only be used once, SpaceX shook the aerospace industry by dramatically slashing costs and developing rockets that can blast out of the atmosphere and then come back down to land on a barge floating in the middle of the ocean.