Maruti Suzuki electric cars flagged off for testing: All about Maruti’s first ever electric car

Maruti Suzuki has commenced the testing of its electric vehicles that have been manufactured at the company’s production facility in Gurugram. The company showcased its first ever EV prototype at the MOVE summit that took place in September this year. 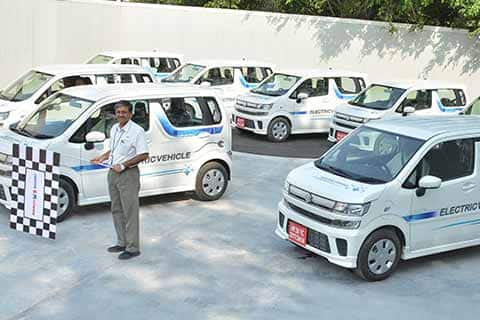 First confirmed in 2017, India’s largest carmaker Maruti Suzuki today lived up to its promise and began testing of its first-ever electric car India. Maruti Suzuki has flagged off its electric car prototype (Electric Wagon R) from its Gurgaon plant and this move will not just boost its R&D in EVs but will also gain a huge customer input from customers. The EVs have been flagged off by CV Raman, Senior Executive Director, Engineering, Maruti Suzuki India. At the MOVE Summit hosted by Prime Minister Narendra Modi that took place in September this year, Osamu Suzuki, Chairman of Suzuki Motor Corporation, Japan had revealed the plan of nation-wide field testing of 50 prototype Electric Vehicles. This was the first time that Maruti Suzuki showcased its pure electric vehicle prototype. The aforementioned electric vehicles have been developed exclusively by Suzuki Motor Corporation, Japan and manufactured at Maruti Suzuki, Gurugram facility, in line with the company’s ‘Make in India’ commitment.

Maruti Suzuki said that this testing of the electric vehicles in multiple terrains and climatic conditions will help it get valuable insights that will help in the validation and successful launch of EV technology in India. The company also added that the testing of these vehicles will also help Maruti Suzuki in gathering critical inputs that will be based on customer perspectives. This will eventually help in creating a reliable and suitable Electric Vehicle that will benefit the Indian customers in multiple ways.

The Electric Vehicles prototypes that have been flagged off for testing are developed on the existing Suzuki Solio by Suzuki Motor Corporation, Japan. In September, Express Drives shared exclusive images of the electric car prototype that gave an idea of how Maruti’s first ever EV will look like. Looking at the pictures, the upcoming Maruti Suzuki electric car will have a tall boy design similar to that of the WagonR. The battery pack on the upcoming Maruti Suzuki electric car will be positioned towards the rear. One can also see that the vehicle will have a low loading lip that might accommodate a lithium-ion battery pack in the underside.

As far as India launch is concerned, the eco-friendly model will be launched here sometime in the year 2020. It has to be noted that the models flagged off for testing are prototypes and the final production model might not come with the exact same design. However, you can expect a lot of similarities with the similar philosophy in styling.

Also Read: Electric Vehicles in India: Is India ready to deal with the dark side of EVs?

Apart from obtaining real-time battery operating data, the electric prototypes will also be sent to suppliers during the testing phase. The step will help Maruti Suzuki in starting the localisation programme for its first ever EV in India well before the 2020 production timeline.

Toyota and Suzuki have also joined hands to introduce multiple new models in India and among these are also electric vehicles. Suzuki will also invest Rs 7,000 crore in Toyota manufacturing facility in Bengaluru. The aim is to ramp up the production capacity of this plant.

Also Read: Maruti Suzuki electric car caught testing for the first time! Maruti’s first ever EV and what to expect

More details on the new Maruti Suzuki electric car expected to be revealed soon, so stay tuned with us for the same.