Audi has just destroyed the fearsome Lamborghini Urus SUV’s lap time around the Nurburgring by a whopping five seconds with the upcoming RS Q8. 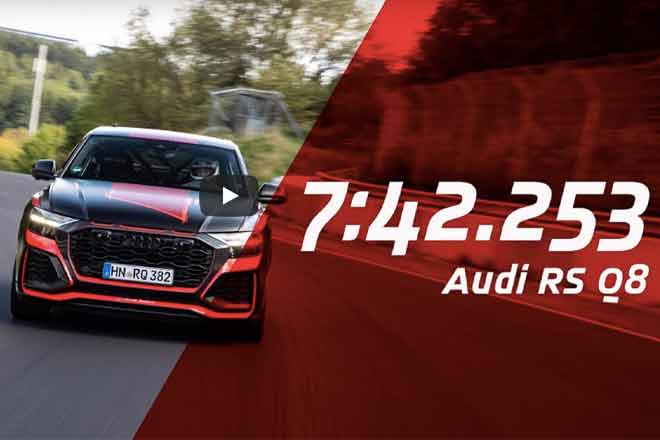 The upcoming Audi RS Q8 has just been around the Nordschleife layout of the Nurburgring and the numbers are astonishing. The RS Q8 is the hardcore road-going performance version of Audi’s SUV line up. The five-door coupe-styled SUV with its 600hp twin-turbo V8 set a time of 7 mins 42.253 seconds at the hands of Frank Stippler, The time is almost five seconds faster than the Lamborghini Urus.

The Audi RS Q8 uses the same power and drive train as the Audi RS6 and RS7 models. So to accompany the 600 ponies, you get 800Nm of torque which is channels through the 8-speed automatic gearbox to the Quattro all-wheel-drive system. While the vehicle has not yet been readied for the road with an official unveil, the exact specifications of the RS Q8 are still unconfirmed. However, to set the time, Audi used a set of 295/35 R23 Pirelli P Zero tyres which will be an option that can be specc’ed for the road as well on the RS Q8.

While the time the RS Q8 set was five seconds quicker than the Urus, it was actually 12 seconds faster than the Mercedes-AMG GLC 63. The Audi RS Q8’s direct rivals include the BMW X6M and the Mercedes-AMG GLE 63 Coupe in addition to other high-performance SUVs like the Porsche Cayenne Coupe.

Watch the entire video of the Audi RS Q8’s Nurburgring lap time below: