An innovation in petrol 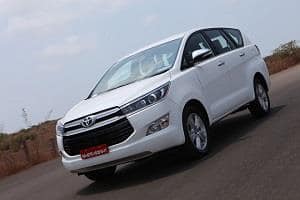 Be it intercity trips or urban commute, Toyota Innova has been the first choice of most cab operators. As for the people who have bought it for personal use—believe it or not, over 70% Innova MPVs are bought by personal-use car buyers.

Launched in 2005, a lot of things have worked—an engine that can last lakhs of kilometres; spacious third-row; efficient AC; comfortable-as-a-sofa second-row seats … the list is long.

In May, Toyota improved it further; calling it the Innova Crysta. Even though the MPV was hit hard by the NCR diesel ban—the region contributes 8% to Innova sales—since its launch it has sold over 24,000 units and has a pending order of 9,000 units. Last week, Toyota introduced a petrol version of the Crysta. We drive it in Delhi.

Large hexagonal grille, a chrome strip that neatly merges with headlamps, triangular third-row window, inverted L-shaped tail-lamps, spoiler on the top-end model … the Innova Crysta looks better than most MPVs. However, products like this aren’t sold on a good design, rather on merit.

The cabin is where the merit lies. First, the feel of luxury—blue ambient illumination; silver decoration on the dashboard; 3D meter; a screen that displays fuel consumption, speed, temperature, navigation, cruising range, phone calls and more. Second, the second-row seats. There is ample legroom, enough back and under-thigh support, and the seat can be reclined to turn it into a narrow bed. Third, the sheer amount of usable space.

The 2.7-litre dual VVT-i petrol engine powers it. Available in both automatic and manual transmissions, the Innova Crysta petrol delivers a power output of 164 bhp and a torque of 245 Nm.

One, this petrol engine is inherently quiet. Two, Toyota has worked well on NVH. This leads to such enhanced levels of cabin quietness and reduced vibration that it’s hard to tell whether the engine is running or not once you shut doors and windows.

The engine is potent, too. Floor the accelerator and the 245 Nm of torque pulls this 1,800-kg vehicle with such ease that you will feel you are driving a peppy sedan. Ditto for drivability. The turning radius is just 5.4 metres and it pretty much drives like a car.

The claimed mileage is 10.83kpl for automatic and 9.89kpl for manual (as per ARAI), which isn’t bad considering the sheer size and weight of the vehicle.

The Innova Crysta petrol manual has a starting price of R13.73 lakh, while the automatic is priced from R14.84 lakh onwards. In manual versions, the ex-showroom price difference between the petrol and similar grade diesel is R1.12 lakh; in the automatic this increases to R1.31 lakh. So, does it make sense to buy a petrol MPV?

For personal-use buyers, it makes perfect sense. One, this is a vehicle that is as close as a big MPV can get to an
entry-luxury sedan—remember, luxury is also about a cosseting, tranquil cabin that the petrol Innova Crysta has.

Two, in case you drive less than, say, 1,000 km per month, you won’t be able to offset, for at least 7.5 years, the over R1 lakh extra you’d pay for a diesel Innova Crysta. Choose wisely. 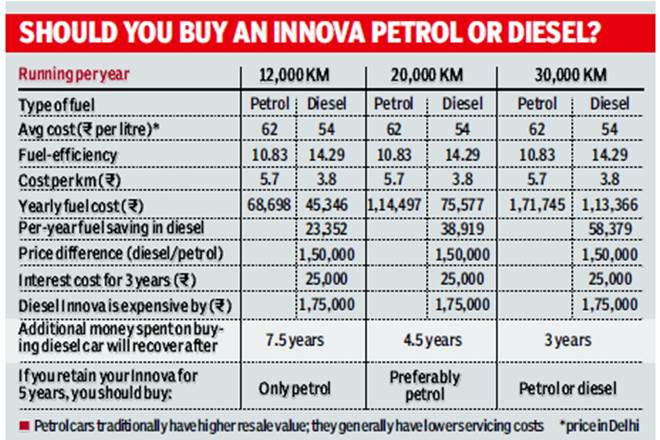 Over 70% of previous-generation Innova MPVs were bought by personal-use car buyers. Is the percentage same for Innova Crysta?

It has, in fact, increased. More than 95% of Innova Crysta MPVs have been bought for personal use. The reason is we had kept an inventory of previous-generation Innova for fleet customers, who demand better price-value equation. The Crysta is more expensive.

I must add that 50% of total Crysta sales are automatic transmission, which speaks a lot about changing customer preference in this segment.

Had there not been the NCR diesel ban, would Toyota still have launched a petrol Innova?

Certainly. The petrol variant was planned much earlier.

With which other car does the Innova petrol share its engine?

This powertrain is available globally, in a few of our MPVs and SUVs.

Why isn’t there a CNG variant yet?

Our long-term vision is hybrid. CNG is a short-term fix. Moreover, the profile of the Innova personal-use car buyer is such that she won’t compromise the vehicle’s comfort or power levels, which can be affected by CNG. In the personal-use segment even in Delhi, less than 5% customers opt for CNG. It is primarily a fleet-owner’s fuel.

Why didn’t Toyota take the mild hybrid route to sell the Innova?