As part of its Climate Pledge, Amazon is preparing to introduce 10,000 EVs into its delivery fleet globally in 2022 and one lakh vehicles by 2030 – saving four million metric tonnes of carbon per year by 2030. 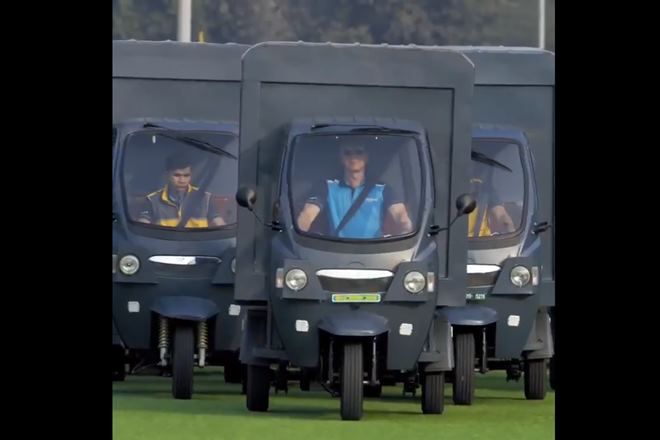 E-commerce titan Amazon CEO Jeff Bezos tweeted a short video yesterday showcasing a fleet of new electric delivery vehicles for the India market. “We’re rolling out our new fleet of electric delivery rickshaws. Fully electric. Zero carbon,” Bezos wrote in his tweet. India is one of the few markets in the world where electric rickshaws have flourished. In fact, in November 2018, India became the largest EV market but it had nothing to do with electric cars as 1.5 million of the contributing vehicles are battery-powered three-wheeled rickshaws.

Amazon has also announced that it will include 10,000 EVs in its fleet of delivery vehicles by 2025. A rival to Amazon, Walmart-owned Flipkart had stated in June last year that it will replace 40 percent of its delivery vans with EVs by March this year. Flipkart delivery EVs are deployed in cities like Delhi, Hyderabad, and Bengaluru.

Amazon, in a statement, said it piloted electric vehicles in several cities across India in 2019 and is now expanding this initiative across the country. It added that learnings from the pilot have helped the company create scalable and long-term EV variants to build this large fleet.

In 2020, these vehicles will operate in over 20 cities of India – Delhi NCR, Bangalore, Hyderabad, Ahmedabad, Pune, Nagpur, and Coimbatore, among others. These EVs are in addition to the global commitment of one lakh EVs in the delivery fleet by 2030 announced in the Climate Pledge signed by Amazon.

As part of the pledge, Amazon had announced its plans to introduce 10,000 EVs into its delivery fleet globally in 2022 and one lakh vehicles by 2030 – saving four million metric tonnes of carbon per year by 2030.

Amazon India said it has been working with several Indian OEMs to build a fleet of vehicles that ensure sustainable and safe deliveries of customer orders. The government’s focus to encourage the adoption of electric vehicles in the country, and steps towards setting up of charging infrastructure with the FAME 2 policy has helped the company accelerate and chart its vision for EVs in India, it added.

The announcement comes days after the American e-tail giant had announced an investment of USD 1 billion for digitising small and medium businesses, and the creation of one million jobs by 2025.