7 iconic cars from pop culture that are not fictional

From the Toyota AE86 to the Aston Martin DB5, here are some of the most iconic cars to be featured in mainstream media. 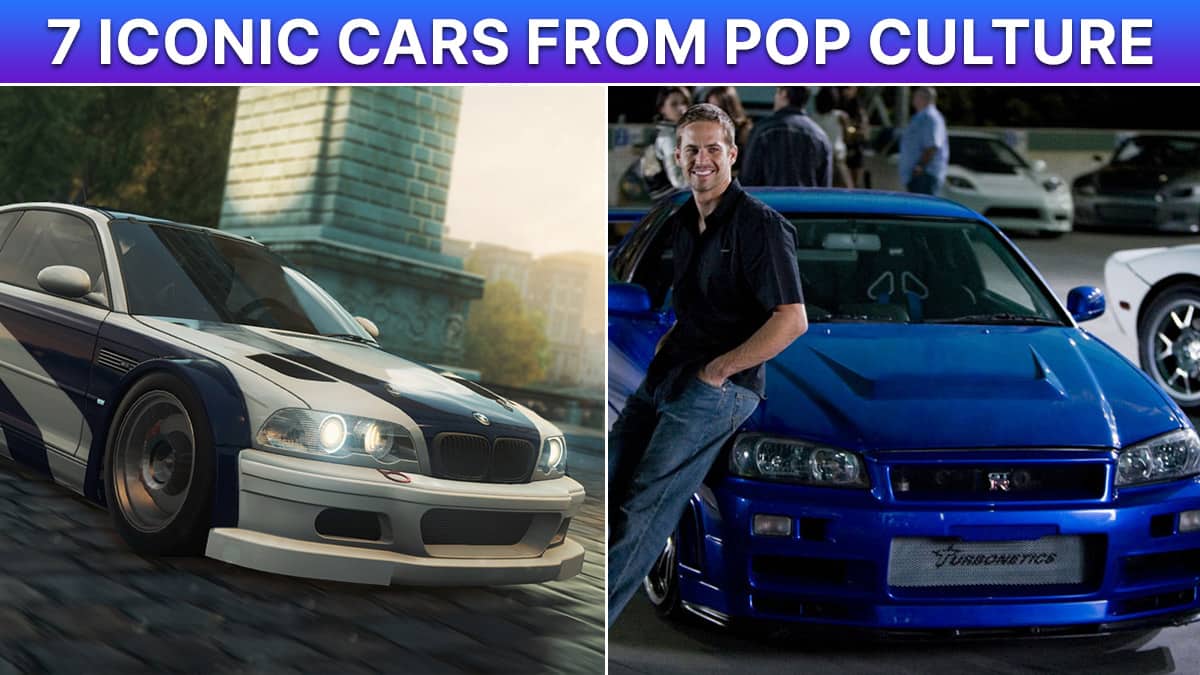 Carmakers across the world come out with numerous new models every year. Some are remembered fondly for their design and performance while some fade into obscurity. Every once in a while, however, a vehicle is prominently featured in a movie, video game or any other form of popular media and clicks in such a way that they themselves feel like fully-realised characters. This can bring manufacturers a lot of recognition and lead to higher sales but most importantly, they are a way of making the masses aware of some brilliant automotive gems. Let us look at 7 iconic cars that have become instantly recognizable and are also not completely fictional.

This is one car that needs no introduction. Every car enthusiast and almost every person that has come in contact with cars knows this name. However, this was not always the case. The original Mark I Mini built by the British Motor Corporation was featured in The Italian Job. No, this is not the 2003 remake, rather this is the original British version released back in 1969.

But it is indeed the 2003 remake that is more recognised by people around the globe. This movie featured the new Mini hatch built by BMW. Despite the updated looks, it retained the small-car silhouette and go-kart style driving character. An interesting fact is that ICE-powered vehicles were not allowed in the LA subway so the production team actually had to build three electric Minis for that specific sequence.

Fictional secret agent, James Bond has driven many amazing cars during his illustrious on-screen career that spans across 6 decades. However, 007 has a distinct liking for cars made by fellow British manufacturer Aston Martin with one car getting more love than the others – the DB5. When you think of cars driven by James Bond, this is probably the first car that comes to mind.

The DB5 first shared screen space with 007 in 1964 in the movie Goldfinger and has made recurring appearances since then. This classic GT car is every bit as elegant and sophisticated as James Bond. Beating inside the DB5 is a 4.0-litre, six-cylinder engine producing power in excess of 280hp and a peak torque of 390Nm. Even without the fancy gadgets from the James Bond universe, the car was rather luxurious to be in and boasted a top speed of 233kmph.

The Fast & Furious franchise started out as a movie revolving around street racing and eventually evolved into movies about space heists. However, cars still remain an integral part of these movies. There are two iconic cars found in the franchise and one of them is the Nissan Skyline GT-R (R34). This is the weapon of choice for the character Brian in the movie, played by the late Paul Walker.

The car was first introduced in the second movie, 2 Fast 2 Furious and then seen again in the fourth instalment. Brian uses a 1999 model in 2 Fast 2 Furious that came with a 2.6-litre twin-turbo engine and a 6-speed manual. While the newer 2002 model of Skyline GT-R seen in Fast & Furious came with a 2.8-litre engine, in the movie it is replaced with a 3.8-litre engine from its successor, the GT-R (R35).

Need for Speed Most Wanted is arguably the most beloved entry in the NFS series of racing games. So, it is no surprise that the poster boy for this title, a BMW M3 GTR GT has become an instantly recognizable car over the years. In the game, the car is fast, handles well and looks absolutely cool.

This M3 GTR GT was BMW’s contender in Le Mans Series GT category and was a motorsports version of the E46 M3. While it originally had a 3.2-litre, straight-six engine, it was replaced by a 4.0-litre V8 engine. This engine had a power and torque output of 443hp and 480Nm, respectively. Equipped with a 6-speed manual box, this racing car could reach a top speed of 245kmph.

The second car from the Fast and Furious franchise is the 1970 Dodge Charger R/T. This American muscle car perfectly complements series protagonist Dominic Torreto’s (played by Vin Diesel) personality and has been featured in many movies from the series.

In true muscle car fashion, the Charger R/T came with a massive 7.2-litre V8 engine and could produce a peak power of 390hp and peak torque of 665Nm. Power was sent to the rear wheels via a 4-speed manual transmission.

If you love cars and also have an affinity towards manga or anime, there is a very high chance that you will recognize this name. The Toyota AE 86 was made popular by the 90s show Initial D as the definitive downhill racing machine.

The exact model driven by the protagonist is a Toyota Sprinter Trueno GT-APEX and is just referred to as the AE86. This front-wheel drive hatchback has a very unsuspecting look about it and came with a 1.6-litre, in-line four-cylinder engine. In the series, the engine eventually goes bust and is replaced with a better one that isn’t actually street legal. This car is so influential that it even made a small cameo in the Fast & Furious films.

7) DeLorean (Back to the Future)

While the DeLorean Motor Company (DMC) might have had a tragic and short run, they did gift us with a rather iconic car. The company’s first and only product, the DeLorean was a futuristic-looking car, mostly thanks to the gull-wing doors. These looks probably were the cause why it landed an important role in the Back to the Future movies.

Despite the impressive façade, the car failed to pack a punch when it came to driving performance. It was driven by a 2.85-litre V6 engine that was good for 130hp and 207Nm of torque. People could get the car with either a manual or an automatic as well. Good performer or not, the car has definitely left an impression on many across the world.