Five ways to help you save Rs 2,000 or more on rising petrol and diesel prices

Increasing petrol and diesel prices are a national cause of concern right now and more so for the common man. While a major price-cut seems unlikely, these simple yet less known tips will help you save money significantly. If you own a car or bike, practicing these simple steps will not only help you enhance the fuel efficiency of your vehicle but will also help cut down maintenance costs. 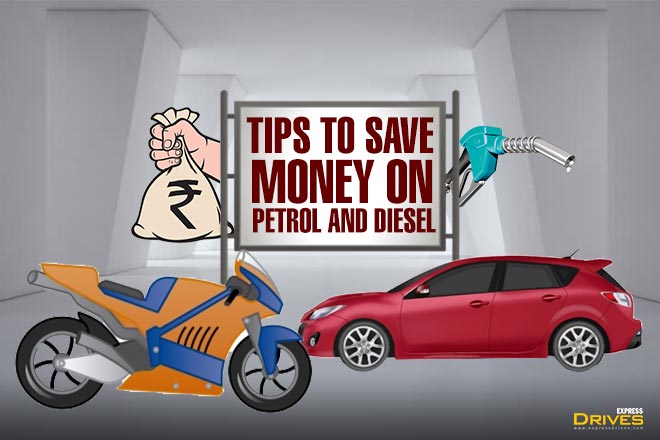 Increasing petrol and diesel prices have been a national talking point for a while and it goes without saying that this is affecting the pocket of people considerably. Fuel prices hit an all-time high last month on 29th May since then the public sentiment has been quite negative as this increase has been hurting the common man the most. One also needs to bear in mind that many cities in India are still massively short of proper public transport infrastructure. As a result, people have no choice except using their own vehicles for daily commutes. While there has been some marginal reduction in petrol, diesel prices over the last few days, the total reduction is not enough to cheer up the growing middle-class of India.

Any possibility of a major fuel-price cut remains slim at best so the next best thing you can do is to save fuel, which will directly help you save money. While there are many fuel-saving techniques that are available all over the internet, there are a few that are easy to implement and significantly effective. With proper implementation of these five techniques, you could end up saving up to Rs 2,500 on a monthly run of 2,000 km or more depending on the distance travelled.

Our calculation is based on an average monthly run of 2,000 km in a petrol hatchback such as the Maruti Suzuki Baleno or the Hyundai Elite i20. Considering a commute in rush hours during weekdays and leisure driving during weekends, we’ve assumed the average fuel-efficiency to be 12 kmpl. In this scenario, one would need 167 litres of petrol and the total cost of fuel at Rs 76.02 per litre (Delhi) would sum up to Rs 12,670. Assuming, these tips help you save 15% fuel, your total savings would amount close to Rs 2,000.

Top Tips to Save petrol, diesel and your money

In the present weather conditions, many parts of the country are facing high temperatures, which means a lot of work for your car air conditioner. Various studies suggest that car AC can increase fuel-consumption by as much as 10%. In order to minimise this figure without affecting the cooling try and park your car under shade or in a basement parking. This will prevent your cabin from reaching temperatures as high as 60 degree Celsius and hence your car AC compressor will be under lesser stress and will be able to cool the cabin faster. When entering a car parked under the Sun, leave the doors open for about 30 seconds. After that, just swing one door four to five times gently as this will push the hot air out from the other side and bring in fresh air. Once you switch on the AC, keep the windows open for a few seconds to let the remaining hot air escape the cabin. Doing this will put less load on the AC, which in turn will result in lower fuel-consumption.

Shifting to neutral even before your vehicle has come to a standstill also consumes more fuel. While most of the people feel that doing so will save fuel as the engine is at idle, this is not the case. In case of a fuel injected car, when you leave the accelerator pedal, the injectors are closed and it is the wheels that drive the engine during coasting. On the other hand, if you put the car into neutral before taking a stop, the engine is still running at idling RPM and hence, it will consume more fuel than the previously mentioned case as the injectors continue to feed fuel into the cylinders at a greater rate.

In case of two-wheelers, ensuring some basic practices can also help you save a significant amount of money. One of such practices is to ensure that the chain of your two-wheeler is lubricated time to time and is neither too tight nor too loose. Also, make sure that the wheels of your bike or scooter are freely rotating and there is no stress while doing so. If the wheels are being exposed to more friction, an increased amount of force will be required to move the vehicle, which in turn will consume more fuel than normal.

Keep the tyres of your vehicle properly inflated in order to achieve a better fuel economy. Tyres offer the only point of contact between the vehicle & road and if these have lower pressure than recommended, then there will be more friction between the tyre and the surface will put more strain on the engine, resulting in more consumption of fuel. For this reason, it is advised to check tyre pressure at least twice in a month and before going on long drives. Over-inflating tyres is also a wrong practice as it can lead to increased braking distances and higher chances of the tyre bursting at higher speeds.