Five most-affordable hybrid cars in India. We list hybrid cars made by manufacturers that are affordable by common car buyers in the country currently. 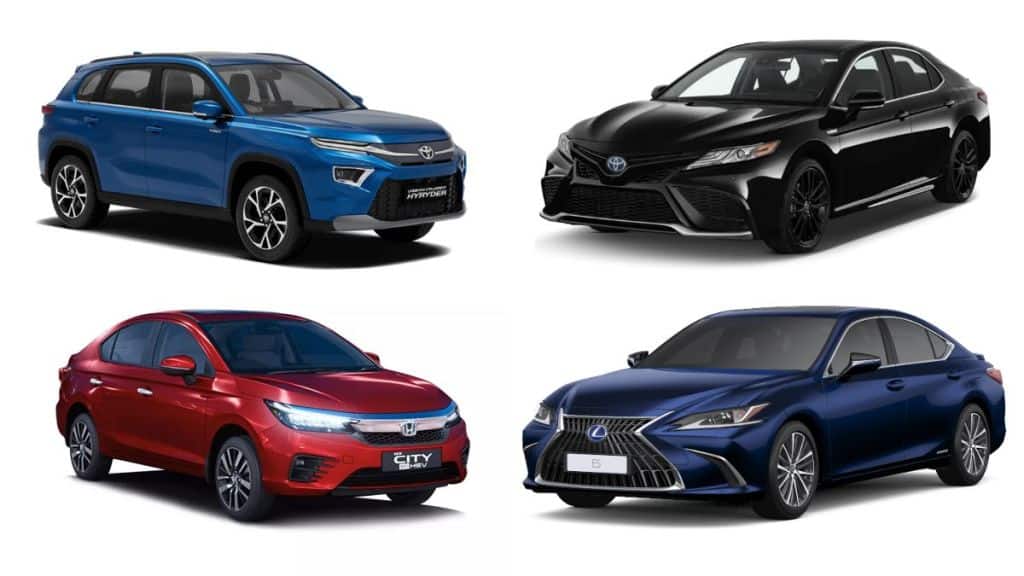 A few years ago, when one speaks about a hybrid car, we all recognise the person speaking about the Toyota Prius. However, times have changed and carmakers now offer several hybrid cars, some specialising in them exclusively. In India, it took time for carmakers to offer hybrids and now, there is a hybrid car to suit every budget and need.

The most expensive hybrid on our most affordable list of cars is the Lexus ES 300h which costs Rs 59.50 lakh ex-showroom, Delhi. The Lexus ES 300h is powered by a 2.5-litre four-cylinder petrol engine mated to a 1.6 kWh, Nickel Metal Hydride battery pack that develops a combined power of 214 bhp and 221 Nm of torque.

The car drives in pure electric mode but switches to a combination of ICE and EV power at higher speeds, allowing the car to accelerate from 0 to 100 kmph in 8.9 seconds while returning a mileage of 22.5 kmpl (Claimed). The vehicle gets all the bells and whistles a luxury car offers including premium leather interiors, a touchscreen infotainment system, and 10 airbags to keep passengers safe.

Next up on our list of most affordable hybrid cars in India is the Toyota Camry, which retails for Rs 44.35 lakh, ex-showroom Delhi. The Camry opted for the hybrid way many years ago, and the car is powered by a 2.5-litre petrol engine paired to a 245 volt Nickel Metal Hydride battery pack – the same setup as the Lexus ES 300h – that develops 214 bhp and 221 Nm of peak torque with the help of a CVT gearbox.

Although based on the same engine-battery pack setup as the Lexus, Toyota claims a mileage of 19.1 kmpl, slightly lower than the ES 300h. The Toyota Camry Hybrid has a range of 958 km while being able to keep occupants in the most luxurious way possible.

The Honda City e:HEV was launched in India recently, priced at Rs 19.49 lakh, ex-showroom Delhi. The City e:HEV uses a 1.5-litre Atkinson cycle petrol engine working in tandem with a 172.8 Volt lithium-ion battery pack to deliver a combined power of 124 bhp and 253 Nm of torque, with the help of a CVT gearbox.

The car uses two electric motors, one to drive the car in pure EV mode at low speeds, while the other acts as a generator to juice up the battery pack while driving. The car switches between electric power and hybrid power on its own, using the onboard computers while no human interference is required. Honda claims a mileage of 26.5 kmpl. You can read more about the Honda City e:HEV hybrid in our first-drive review.

The second most affordable hybrid car in India currently is the newly unveiled Toyota Urban Cruiser Hyryder. The mid-size SUV based on Maruti Suzuki’s platform will go on sale in India soon and will be offered with two engines, one of them being a 1.5-litre petrol motor from Maruti Suzuki.

The other engine on offer will be a 1.5-litre unit again, but this time working alongside a hybrid system to develop a combined power output of 114 bhp with the help of an eCVT gearbox. The Toyota Urban Cruiser Hyryder can run on pure EV mode and will also have an AWD option, but more details will be available once Toyota launches the SUV in India.

For the ones asking “Is it back?”, yes, Maruti Suzuki is reviving an old name. The upcoming Maruti Suzuki Grand Vitara is Maruti’s product based on the Toyota Urban Cruiser Hyryder. Similar to its Toyota sibling, Maruti too will offer two engine options, one of them being a hybrid system.

The hybrid engine on the Grand Vitara will be identical to the Hyryder, however, the eCVT gearbox and the AWD system might see a skip to keep costs in check, or Maruti could use something from Suzuki’s global lineup. Bookings are open at Nexa dealerships for the Grand Vitara and prices are expected to start from Rs 9 lakh onwards (ex-showroom, Delhi), however, the full hybrid variant could cost up to Rs 15 lakh (ex-showroom).