The Land Rover Experience shows you what a Land Rover can really do, check out these pictures that show Land Rover’s breaking gravity like its nothing. 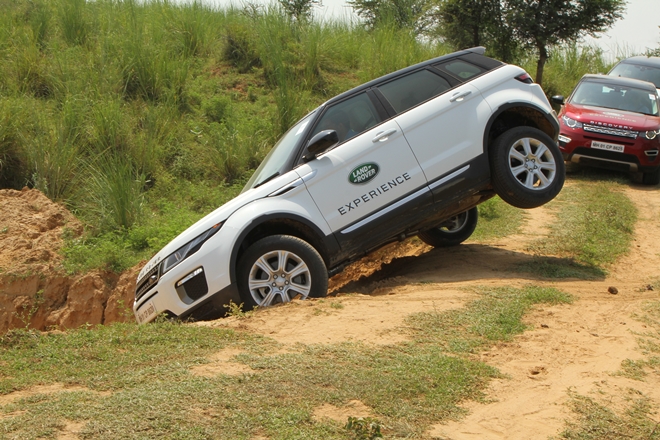 When Maurice Wilks, conceptualized the centre-steer Land Rover, based on Jeep underpinnings, he wanted to build a car that could go anywhere. Water-wading up war-ravaged beaches and all. Over the years, Land Rover have kept that go-anywhere ability as the centrepiece of their design and build ethos, no matter how comfortable or luxurious. Any Land Rover or Range Rover should be able to go off-road, period. That has not changed. Truth be told, per contra, most Land Rovers that leave the marbled luxury of their showrooms, go-on to live charmed lives in the backdrop of page-3 events. Ferrying celebrities, sportsmen WAGs and rarely even touch gravel, forget serious off-roading in the ruts and mud. It’s easy to forget, that deep under all that polished aluminium and Alcantara leather, that Maurice Wilks legacy still lives on. Which is why Land Rover has the Land Rover Experience. A short outing in a Land Rover through the most treacherous terrain they can find to remind you that no matter how far they have come in terms of luxury and refinement the Range Rover can still conquer all. Done with a dash of patience and you could get through without so much as a nick on the fenders. We joined in on the Land Rover Experience in Delhi to see really how much a Land Rover can do. 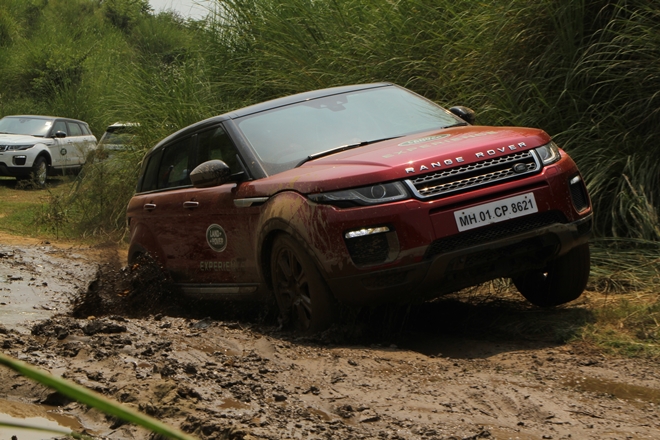 Land Rover India has tied up with Cougar Motorsport, the same good people that organize the Indian Round of the Rainforest Challenge, one of the most hardcore off-roading events in the country. They laid out the route and then got in the passenger’s seat to instruct us through it. A terrifying job that they seem to have down to a science, so much so that they seem unperturbed by yours truly’s lead foot. The entire exercise is to show customers what they can really do with their Rovers with some patience and skilful driving. The Land Rover takes care of the rest. Thanks in no small way to Land Rover’s epic ‘Terrain Response System’. 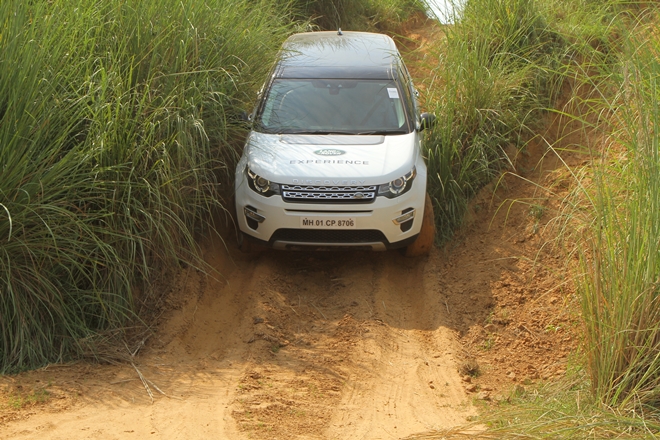 The Terrain Response system has a few modes including rock crawl, grass gravel, mud and ruts aside from the general driving mode. ‘Yes, sir! I would love to take my half-a-crore rupee car crawling on rocks!’. I know! Absurd right? Well as it would turn out each of these modes, alter the steering, braking, traction control, throttle response and the gear ratios. It evens controls the amount of power going to each wheel depending on the amount of traction you have on each wheel. The result of this crazy engineering is that normal people like you and I can go up to physics and slap it in the face, all while sitting in the very lap of luxury itself!

The course set amidst farmhouses in Gurgaon was mostly natural and that meant that it was even more challenging. Narrow pathways, steep inclines, loose gravel, ruts and mud, surely no place for a car with a half-crore price tag!  Or is it? The Land Rover scuttles up gravel slopes like gravity doesn’t exist, it manoeuvres through ruts like it was born to it, and if you have a sharp turn and a steep incline it will gladly lift a wheel in the air, while the Hill Descent Guides the brakes gently down the slope. 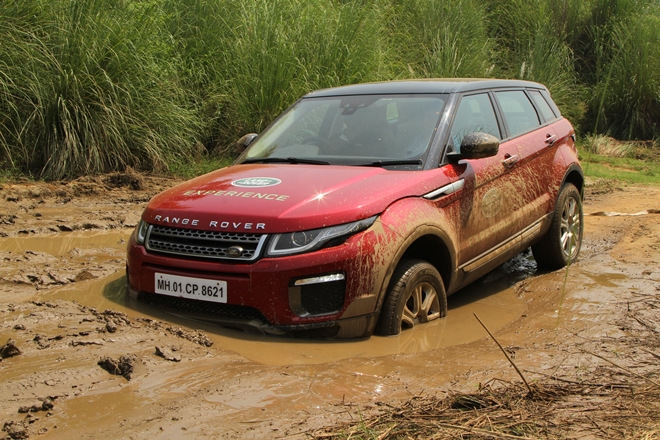 Even through soft mud on road tyres, both the Discovery Sport and the Range Rover Evoque out on the drive with us just glided through. Traction control lights flaring and all.

All in all, Both the Discovery Sport and our Range Rover Evoque that were on offer for the experience  got through the course without even the slightest hiccup, proving that Range Rovers are not just for trawling elite clubs and ferrying rich folk, under all that Alcantara leather and polish, it’s still a rugged go anywhere off-roader that was built to conquer the unconquered.These pictures should explain the rest!