Honda Jazz facelift spied in Brazil and is expected to be launched in India in 2017. 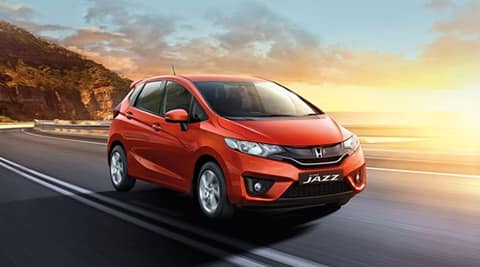 Honda is working on the Jazz facelift as the upcoming hatchback has been spied testing in Brazil recently. The spied images reveal that the 2017 Jazz will get cosmetic updates, while the engine options are expected to remain unchanged. The major cosmetic enhancement can be seen on the front and rear of the car. The front will get an updated design in the form of a revised front grille, bumper as well as updated fog lamps. At the rear, similar treatment will be given in the form of redesigned bumper and new LED tail lamps.

Similar to the exterior, the cabin of the upcoming 2017 Honda Jazz too will get upgrades such as new trim and seat upholstery, new instrument panel and a new 7-inch Digipad touchscreen infotainment system, which is also available on the new Honda City and the WR-V. The side profile will be similar to the ongoing model and it is expected to get new alloy wheels. In a nutshell, the interior will be updated to look more like the new WR-V.

The Honda Jazz facelift is likely to be powered by the existing 1.2 litre i-VTEC petrol unit that produces 88 hp of power at 6,000 rpm and 110 Nm of torque at 4,800 rpm and is paired to a 5-speed manual and a CVT (Continuous Variable Transmission) gearbox. The diesel variants will be powered by the 1.5 litre i-DTEC unit with 98 hp and 200 Nm of torque and will be mated to a 6-speed transmission.

Expected to be priced higher than the existing model, the 2017 Honda Jazz will rival with the likes of the Maruti Suzuki Baleno and Hyundai i20 in the segment. The company is expected to launch the Jazz facelift in the later part of 2017 in the country.