2017 Ford EcoSport might get a new petrol engine, launch during festive season

The 2017 Ford EcoSport is expected to be available with a wide range of engine options that will consist of an all-new Dragon series petrol along with an existing petrol and diesel options. 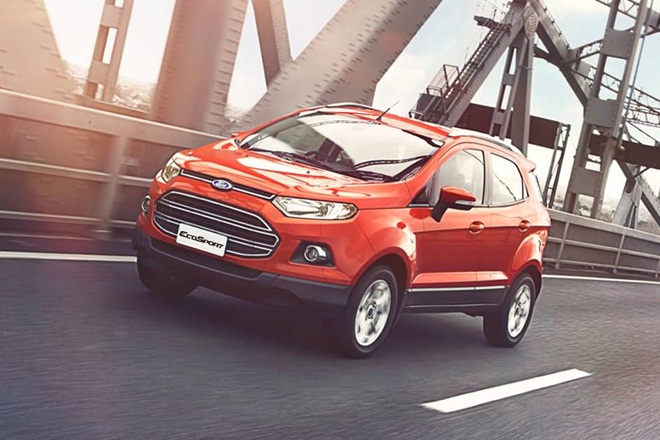 Ford India will launch the updated EcoSport in the country during the festive season, the sub-compact SUV has been spotted several times revealing the exterior design as well as the interior features. Earlier, we reported that the upcoming Ford EcoSport will be powered by the same 1.5 litre petrol and 1.0 litre EcoBoost petrol engine along with the 1.5 litre diesel unit. The above-mentioned engines also power the current EcoSport models. It is now expected that the carmaker will also launch the 2017 EcoSport with a new petrol engine. The updated Ford EcoSport is already available internationally with the all-new Dragon series petrol units. It is likely that the car manufacturer will also equip the car with the same Dragon series of three cylinder petrol engine, but it will produce about 100 hp of power than the 120 hp available in global markets. The engines are expected to be paired to a 5-speed manual gearbox as standard, while some variants will get an automatic transmission.

The company has not confirmed or announced any details about the new petrol engine, but it is likely to be a newly developed unit that will meet the latest emission norms. The reports also suggest that the engine will be made of aluminium that will reduce the weight of the vehicle by around 10 percent as compared to the current four-cylinder Sigma unit to offer better mileage.

Besides this, the Dragon series of petrol engine will be equipped with technologies such as an integrated exhaust manifold, a variable oil pump, a rocker shaft with hydrodynamic bearings and dual-valve independent valve control. The new engine might also feature individual ignition coils for each cylinder, spark plugs centralised in the combustion chamber and hydraulic tappets with rotor arms.

The 2017 Ford EcoSport will be launched in late September or early October (festive season) and the deliveries are expected to commence in November, 2017. The car will be priced around Rs 1 lakh higher than the outgoing model and is expected to be priced between Rs 7.10 lakh and Rs 10.38 lakh, ex-showroom. The 2017 Ford EcoSport will compete with the likes of the Maruti Suzuki Vitara Brezza and Honda WR-V in the compact-SUV segment.  Upcoming Ford EcoSport will also be an important export model as the first time the company will be exporting it to the U.S market starting 2018.