Upcoming scooters in India in 2017

Here is a list of some of the expected upcoming scooters in India in 2017 with their specification, features as well as expected price. 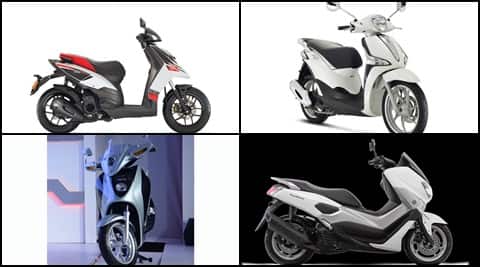 Upcoming scooters in India in 2017

The sale of scooters in India have grown stupendously in the recent past and the two-wheeler makers in the country are also gearing up for launch of both updated and all-new models in India. Gear-less operation of the scooters makes it convenient for a daily commute in cities which inadvertently have traffic jams and slow moving traffic. This year will also witness a new and upgraded version from TVS in their 125 cc scooter model lineup that will compete with the likes of the Honda Activa 125. Other manufacturers will also launch their respective vehicles in order to boost sales. Here is a list of some of the expected upcoming scooters in India in 2017 with their specification, features as well as expected price.

TVS Motor Company will launch an all-new 125 cc scooter in the country this year that will join the Jupiter, Wego and Scooty Pep+ in the company’s portfolio. It is expected that the two-wheeler maker will launch the new 125 cc scooter under the Jupiter brand. Although TVS has not confirmed the expected launch date and other details like specifications, but we expect the new scooter to be launched this year itself. The new scooter with 125 cc engine is expected to generate around 8 hp of power and 10 Nm of torque which will be paired to a CVT (Continuously Variable Transmission) unit.

Bajaj Chetak is one of the best-selling and the most popular scooters in India since 1972, and the company is considering relaunching the new Chetak in India soon. Before the company discontinued the Chetak, it was powered by a 145 cc four-stroke engine that produced 7.5 hp of power and 10.7 Nm of torque. The new Chetak is speculated to be launched in 2017 and will feature an all-new design language. Information in terms of specifications and features is sketchy, however, we believe that the Chetak will get a front disc brake, a conventional suspension setup for better ride quality and a host of utility spaces such as large under seat storage, front storage space and hooks under the seat. Bajaj could also offer the scooter with premium seat upholstery and a number of body colour options in both gloss and matte finish. The new Chetak is expected to be powered by a 125 cc or a 150 cc four-stroke, air-cooled engine.

The new offering by Hero MotoCorp in India will be a new 125 cc scooter Dare that is expected to reach showrooms this year. The Dare 125 is expected to be available with an air cooled, four-stroke OHC engine that will produce about 9.11 hp and 9.5 Nm of torque. The new Dare is also expected to get LED DRLs (Daytime Running Lamps) and a LED tail lamp. Other features expected on the two-wheeler include a dual-tone body colour, fully digital instrument cluster, mobile charging socket, telescopic forks and alloy wheels. The new Hero Dare is speculated to be launched with a price tag of Rs 60,000.

Honda Motorcycle and Scooter (HMSI)’s 150 cc scooter, the PCX 150, was showcased at the 2014 Auto Expo. The new Honda PCX 150 has already been imported to India for R&D (Research and Development) purposes and is expected to be launched in the second half of 2017. The scooter is already available in the international markets that is powered by a 150 cc, single-cylinder, fuel-injected unit which produces 11 hp and 14 Nm of torque. Besides this, the PCX 150 will feature a modern design language with fairing on each side as well as the front. The two-wheeler manufacturer might also equip the PCX 150 with LED turn indicators, front and rear disc brakes and a digital instrument console. The new Honda PCX 150, when launched, will be a premium offering by the company and is likely to be priced around Rs 90,000, ex-showroom.

Yamaha showcased the new Nmax at the 2016 Auto Expo, and it is already sold in the international markets. The Yamaha Nmax is powered by a 155 cc liquid cooled, four-stroke SOHC engine that develops 15.1 hp of maximum power and 14.4 Nm of torque. It is expected to feature the company’s Blue Core technology for improved fuel efficiency like other Yamaha scooters in India. Yamaha will also equip the new Nmax with a blackened out headlamp, digital instrument console, LED turn indicators at the rear and an external fuel lid. The international model gets ABS (Anti-lock Braking System) as standard, however, in India, this safety feature may be missed out. The Yamaha Nmax is expected to be launched in India by the end of 2017 and is expected to be priced around Rs 1 lakh (ex-showroom).

Piaggio currently sells its Vespa scooters in India, and the new Piaggio Liberty will be the first scooter that is expected to be priced lower than the Vespa models. The Liberty sold internationally gets a 125 cc engine that also powers the Vespa’s 125 cc scooter in India. The engine produces 10 hp of power and 11 Nm of torque which is paired to a CVT automatic gearbox with torque server. The Liberty sold internationally features a single-channel ABS braking system, under-seat storage compartment that can hold an open face helmet and a front glove compartment. The scooter has a low saddle height that will make it easy to ride for short riders. When launched in India, the company might offer ABS as an option along with a host of accessories such as windscreen, anti-theft system, electronic alarm, Piaggio sound system and more. The new Liberty will also feature chrome finishes on the rear view mirrors, LED front lights, analogue speedometer with digital fuel and distance indicators.

Hero Leap will be the first electric hybrid scooter by the two-wheeler manufacturer in India that was first showcased at the 2012 Auto Expo as a concept. The Leap will be powered by lithium-ion batteries and an 8 kW electric Permanent magnet AC (PMAC) traction motor as well as a 124 cc engine. The Leap can be charged by plugging into a wall outlet, has a 3-litre fuel tank capacity and a top speed of 100 kmph. The upcoming scooter will receive aerodynamic styling, all-LED lights and a Brembo two-piston front 240 mm disc brake.