Exports of bikes and scooters from India is on the rise for the fourth straight month now. Bajaj Auto and TVS Motor Company remain the top two-wheeler exporters from India. Strong demand from countries like Bangladesh and regions of Africa and Latin America has helped Indian bike makers to post an export growth of 30%. 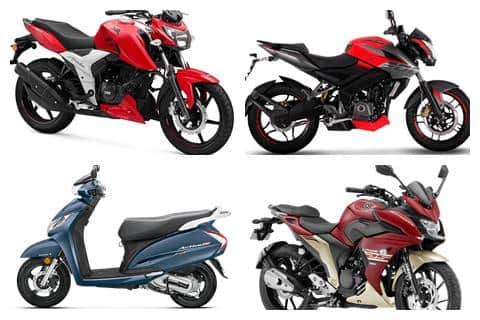 Exports of bikes and scooters from India is on the rise and Indian home-grown two-wheeler manufacturers have reported a strong growth in its exports which has been up since the beginning of the financial year. In the period between April – July 2018, two-wheeler exports from India has clocked a total of 11,37,223 units up by almost 30% when compared to the same period last year. With the rate of dollar crossing the Rs 70, the profit margins for Indian two-wheeler manufacturers will go up and most of the bike makers will make the most by exporting more out of India to make the most of this volatile rupee condition.

Anand Mahindra, Chairman, Mahindra Group on rupee fall had said that “Instead of bemoaning its fall, should we view this as the ‘Make in India Moment?’ With this boost to India’s export competitiveness could we now convince global companies that it’s time to switch to India for world-scale,export-focused manufacturing?”

With exports of motorcycles and scooters up, Rajiv Bajaj led Bajaj Auto is the number one two-wheeler exporter from India and has retained this position for a while now. The company exported over 5.66 lakh bike out of India at a growth rate of about 26%. Bajaj Auto exports have been up due to strong market sentiments to its export countries including Nigeria, Philippines and Colombia. The company also has recently ventured into new markets of Thailand and Malaysia. Africa and Latin America remain the top export regions for Bajaj Auto.

Hosur based two-wheeler manufacturer, TVS Motor Company exports to over 50 countries and in the ongoing financial year has exported over 2.19 lakh units of its motorcycles, scooters and mopeds combined. The company exports to many Africam, Asian and Latin American countries. Breaking it up, exports of scooters went up drastically and stood at 19,215 units and motorcycle sales outside India stood at 1,89,621 units.

Honda Motorcycles and Scooters India exported a total of 1,54,294 units from India to its export markets. This included 59,625 units of scooters and 54,806 units of motorcycles. Company’s exports are up by over 34% and the company is confident of slowly making India its one of the major export hubs.

India’s largest two-wheeler manufacturer, Hero MotorCorp exports also reported a growth by 15%. The company also makes bikes in other countries including Bangladesh and Colombia that has an annual capacity of 1.50 lakh and 80,000 units respectively. Overall the country exported 62,866 units from India. Hero Motorcorp will be venturing into new export markets and plans to enter Brazil and Mexico by 2019.

Yamaha Motor India exports to Nepal, Bangladesh and Sri Lanka have seen a huge demand and the company has already exported 91,965 units from India with a growth of over 40%. Suzuki Motorcycles and Royal Enfield exports stood at 23,480 units and 7,698 units respectively.

Overall, 13% of overall two-wheelers made in India were exported to international markets. Premium bike makers including Harley-Davidson have seen a decline in exports from India due to changes in policy.