Top 10 two-wheeler manufacturers in India: 44 units of bikes and scooters sold every minute

India, being the largest two-wheeler market in the world sees hundreds of new vehicles rolling out on the roads every day. Here we have listed the top 10 two-wheeler manufacturers in India during the period April to September 2018 (H1 2018-19). 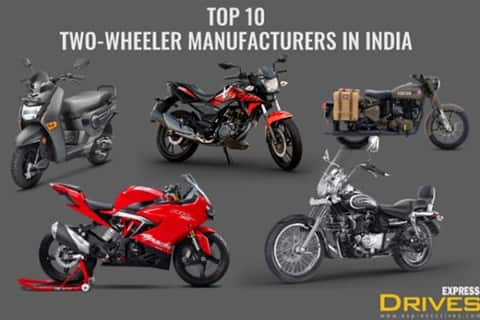 The previous financial year put most of the two-wheeler manufacturers into trouble for multiple reasons. First and foremost, the ban by the Supreme Court of the sale of BS-III two-wheelers proved no less than a nightmare for the two-wheeler makers. Furthermore, the implementation of GST also bought down the sentiments to buy new vehicles and hence, the growth of the two-wheeler industry was not at par with what was expected. Now, on its path to recovery, the two-wheeler sector has seen a positive decent growth during the first half of the current FY 2018-19. During this period, the Indian automotive industry sold a total of 14,155,758 units of vehicles in India against 12,756,611 units when compared to the same period last year, hence accounting for a growth of 10.97 percent. Out of these, 11,569,770 units contributed as two-wheelers and the sector saw a growth of 10.07 percent when compared to the same period last year. Here we take a look at the top 10 two-wheeler manufacturers during the period April to September 2018.

India’s largest two-wheeler manufacturer continues to be on the top as it sold a total of 4135200 units of two-wheelers during April September 2018. With this, the company reported a growth of 9.18 percent when compared to the same period last year. This growth and impressive sales numbers were driven primarily by motorcycles sales and the Hero Splendor and HF Deluxe have been the key contributors.

Honda stood at the number two spot when it comes to two-wheeler sales from the period April to September 2018. During the period, the sales numbers of the company accounted for 32,96,661 units. Trailing behind by Hero MotoCorp by close to 8 lakh units, the company has shown a growth of 4.77 percent growth compared to the same period last year. The robust sales of the company’s automatic scooters with Activa setting the sales charts on fire is the key reason behind these numbers.

A wide variety of product range along with the recent launches helped TVS Motor Company achieve a growth of 10.04 percent. During the period April to September 2018, the company sold a total of 16,19,439 units of two-wheelers taking the number three spot. These numbers and the double-digit growth is all thanks primarily to the company’s Jupiter automatic scooter followed by the commuter motorcycles. The moped category also made a key contribution as the TVS XL range found over 4 lakh new homes during these six months.

Here are the top 10 two-wheeler manufacturers and their sales numbers during the period April – September 2018:

Bajaj Auto took the number four spot in April to September 2018 two-wheeler sales. During the period, the company sold 1287133 units of two-wheelers showing an impressive growth of 27.37 percent compared to the same period last year. The growing interest in Bajaj Avenger brand along with the strong response for the Pulsar and entry-level commuters like CT100 and Platina have been the reasons behind this growth.

The first half of the current fiscal didn’t bring much good news for India Yamaha Motor Pvt Ltd in terms of growth as the brand managed to see just 0.05 percent growth during the period. The company sold a total of 425387 units of two-wheelers during the period. The consistent sales numbers is a result of the decline in the company’s motorcycle sales that was compensated by the positive sales of automatic scooters.

Royal Enfield, the brand known for thumping cruisers sold a total of 424805 units of its motorcycles during the period April to September 2018, thereby registering a year on year (YoY) growth of 12.29 percent. The Royal Enfield Classic 350 has been a blockbuster for years now and this time too, the model has been the key contributor to the sales. The launch of the upcoming Interceptor and Continental GT 650 is only expected to better the sales of RE.

Suzuki has shown the maximum growth in the list at 37.13 percent as it sold a total of 331014 units of two-wheelers during the first half of the current financial year. The impressive growth and the sales are majorly contributed by Suzuki Access 125 that has been consistently the best selling 125cc automatic scooter in India for years.

Piaggio sold 42289 automatic scooters during the first half of the current fiscal, thereby reporting a growth of 25.62 percent when compared to the same period last year. This growth is all thanks to the decent response for the Aprilia SR 150 scooter while the launch of the more affordable SR 125 a few months back has also been a contributor.

The first half of the current fiscal has not been good for Mahindra two-wheelers as the company sold just 2463 units of two-wheelers in six months, thereby reporting a decline of 73.69 percent in sales. The company announced its exit from the mass market two-wheeler segment in September last year and intends to focus more on premium bikes now. The upcoming Jawa that is seen as a tough rival to Royal Enfield can indeed help Mahindra see some relief in this area.

Things have not pleasant for UM Lohia as well as the company had to face a negative sales of 49.16 percent. The brand sold just 2115 units of motorcycles in six months. The company’s Renegade range is not performing up to the expectations of the manufacturers and is facing serious troubles from Royal Enfield. Nonetheless, the upcoming multiple launches might do the much-needed trick for the company.