Indian rider and Dakar 2019 finisher Aravind KP, who was a part of the TVS Racing team since 2006, sustained a leg injury during his practice session earlier this year and hence, he will not be able to participate in Dakar Rally 2020. 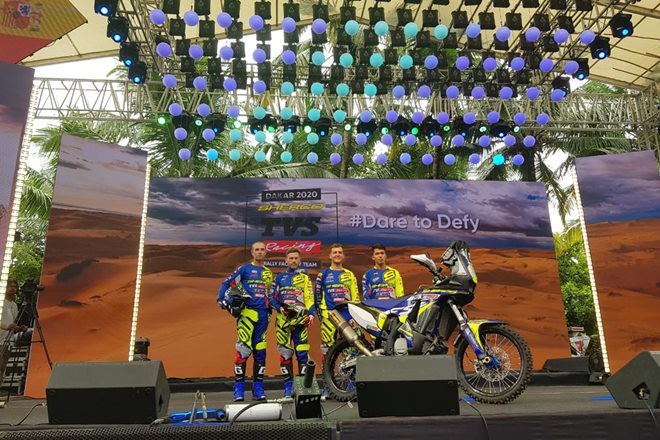 Sherco TVS Rally Factory Team has announced its squad for Dakar Rally 2020 that is scheduled to take place starting January 5th and 17th, 2020 in Saudi Arabia. The company’s team includes Michael Merge from France, Enduro Champion Lorenzo Santolino from Spain and Johnny Aubert from France. India’s Harith Noah will be making his debut at the Dakar Rally. The Sherco TVS Rally Factory Team had a great year with some impressive performances at all international events in 2019 like Merzouga Rally, Desert Storm and Baja Aragon. With this, the company is eyeing a strong finish at Dakar 2020. Dakar 2020 is the 42nd edition of the annual international Rally-Raid that will take place in the dunes of Saudi Arabia this time.

The rally will be commencing at Jeddah passing through Riyadh and will finally culminate at Al Qiddiya. This one is Sherco TVS Rally Factory Team’s sixth consecutive year of its participation in the Rally. Michael Metge is gearing for his seventh outing at this Rally this year while Lorenzo Santolino will be making his second appearance at Dakar Rally. The team also welcomes Johnny Aubert, who finished sixth in Dakar 2018 and brings with him 35 years of racing experience. Last but definitely not the least, the fourth rider, Harith Noah from India has shown tremendous performance in the international rallies.

Indian rider and Dakar 2019 finisher Aravind KP, who was a part of the TVS Racing team since 2006, sustained a leg injury during his practice session earlier this year due to which he will not be able to participate in Dakar Rally 2020. KP completed the 2019 edition of Dakar at 37th position that made him the only Indian to finish the rally.

TVS Motor Company made this announcement at the ongoing TVS MotoSoul event in Goa. The first edition of MotoSoul aims to bring man and machine together. The two-day music festival with tons of action for motorcyclists has been scheduled for 18th and 19th October.