In order to expand its mid-sized motorcycle segment(250cc-750cc) across the globe, the company is focusing on international markets 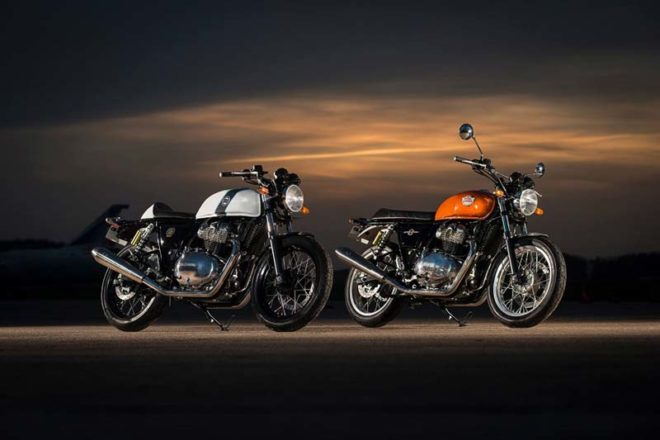 At EICMA 2017, Royal Enfiled unveiled their much awaited 650cc twins- Continental GT650 and Interceptor 650 INT. Now, Royal Enfield is working on three new platforms and these new platforms will replace the existing ones when the new emission norms come in, as reports Autocar. It is expected that the company might bring Royal Enfield Himalayan with bigger displacement engines and that might be on one of the new platforms. The report also claims that Royal Enfield might bring electric motorcycles at later stages The new 650cc twins are based on a new platform and is powered by a 648cc, parallel twin, 4-stroke, single overhead cam, air-cooled engine that produces 47 bhp and 52 Nm of torque mated to a 6-Speed gearbox with the slip-assist clutch.The new engine has been developed by Royal Enfield’s UK Technology Centre and Chennai team. Both the motorcycles can easily cruise upto 120-135 kmph. The company will roll out both the motorcycles from its Chennai plant by April 2018 to European and Indian markets. The company has also confirmed that both twins will come equipped with ABS as it is mandatory for two-wheelers above 125cc from April 2018.

In order to expand its mid-sized motorcycle segment(250cc-750cc) across the globe, the company is focusing on international markets. In the next five years, the manufacturer will expand its operations in South East Asia and Latin American markets. Currently, Royal Enfield has twenty exclusive stores outside India like in Milwaukee, London, Paris, Barcelona, Madrid, Valencia, Bogota, Medellin, Dubai, Jakarta, Bangkok and Melbourne.
Royal Enfield has also started production of motorcycles from its third manufacturing unit in Chennai. The company aims to produce motorcycles for both domestic and export markets. On the development of the new product and platform manufacturer plans to invest Rs 800 crore in its plant’s expansion.In addition, the company has witnessed a growth of 17.6 percent in the export market in a period between April- September 2017.