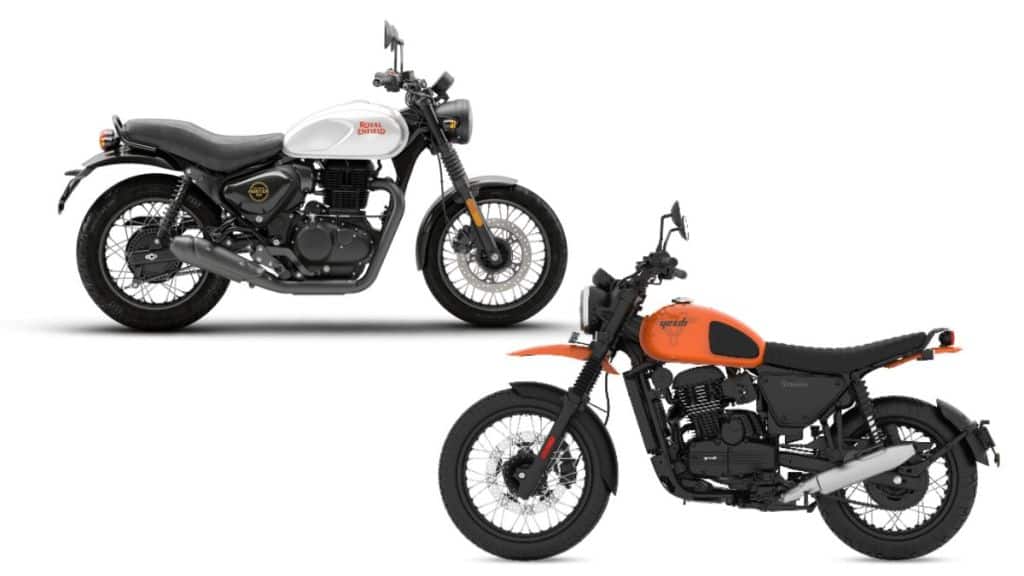 The newly-launched Royal Enfield Hunter 350 is the company’s most affordable offering for India, priced at Rs 1.49 lakh ex-showroom. The new Retro motorcycle competes with the TVS Ronin, while also competing with the Honda CB 350 RS, and the new Yezdi Scrambler, although not directly.

Let’s compare the new Royal Enfield Hunter 350 Retro vs the Yezdi Scrambler in terms of design, dimensions, equipment, features, and engine specifications, as they both offer certain common elements.

The Royal Enfield hunter is priced at Rs 1.49 lakh ex-showroom. The Hunter 350 is available in three variants, priced as below. The Yezdi Scrambler, on the other hand, is priced at Rs 2.07 lakh onwards (ex-showroom), and goes up to Rs 2.13 lakh, depending on the choice of colour.

The Royal Enfield Hunter 350 Retro variant features an all-black design with a single-piece seat, a side-slung exhaust also finished in black, and a single round headlight. The Yezdi Scrambler, on the other hand, features a similar tank and side box design, however, gets a high-mounted front fender with dual exhausts.

Between the two, the Royal Enfield Hunter has a marginally shorter wheelbase, translating to sharper handling, while the Yezdi Scrambler has better ground clearance. Both motorcycle, however, have identical overall weight, saddle height, and fuel capacity.

The Royal Enfield Hunter gets 17-inch wheels, a telescopic front fork, dual rear shocks, a single pod instrument cluster, and dual disc brakes with a dual-channel ABS. However, the latter is for the Metro variant, as the Retro variant gets 17-inch spoke wheels, disc brake at the front and drum brake at the rear, single-channel ABS, tube-type wheels, and halogen lighting all around.

The Yezdi Scrambler gets a similar setup, it gets a telescopic front fork, dual shocks at the rear, 19-inch front and 17-inch rear wheels, disc brakes at both ends with a dual-channel ABS with three modes, a fully-digital instrument cluster, and an LED headlight amongst others. When comparing the two in terms of equipment and features, the Yezdi Scrambler is better equipped.

The two motorcycles differ the most in the engine and gearbox departments. The Royal Enfield Hunter 350 gets a 350cc, air-cooled, single-cylinder engine that makes 20 bhp and 27 Nm of torque, paired to a 5-speed gearbox.

The Yezdi Scrambler gets a 334 cc, liquid-cooled single-cylinder engine, capable of 28 bhp and 28 Nm of torque with the help of a 6-speed gearbox. Amongst the two, the Yezdi is more powerful, offers marginally better torque, offers one more gear, and is cooled better.

Which one should you buy?