With Bosch vehicle technology powering the Polar Odyssey, three riders on Bajaj Dominars embarked on a ride of a lifetime – from Arctic to the Antarctic. What are the Bosch tech components and how do they help improve two-wheeler safety? We found out. 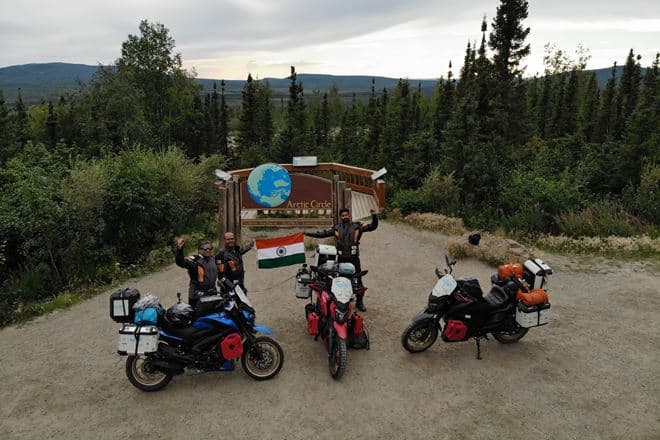 A lot can be learned from a motorcycle ride from Earth’s one pole to another, in terms of long distance riding and vehicle technology – Bosch tells us how. Express Drives recently got in a conversation with Prabhu Panduranga, Regional President, Passenger car segment, Power-train solutions, 2 wheeler & Power sports systems, Bosch India. He gave us an insight into Bosch vehicle technology powering the Polar Odyssey and how the brand hopes to promote safe riding in India.

The Polar Odyssey, with its three riders on Bajaj Dominars, will cross some of the world’s most dangerous roads starting from the Arctic Circle to all the way down to the Antarctic Circle. The entire ride, currently underway, will span over four months, covering a distance of more than 50,000 km across 17 countries in North, Central and South America.

What are the Bosch components and smart vehicle technology being used on the Polar Odyssey motorcycles?

The bikes are equipped with Bosch safety features such as ABS (Antilock Braking System) safety braking and Bosch Engine Management System (EMS) to guarantee a smooth running of the vehicle and safety for the riders. Through this ride, Bosch aims to inspire bike enthusiasts and adventure travellers to travel safely while riding on two-wheelers.

The EMS system from Bosch includes components for fuel injection and supply, air management, ignition and exhaust-gas treatment, as well as engine control units to facilitate powerful and synchronized performance for two-wheelers.

The superior technology employed by the EMS not only ensures the smooth running of the bikes but also allows two-wheelers and power sport vehicles to fulfil new emission regulations.

Driving at high speeds on highways and roadways can often lead to fatal road accidents. With an effective ABS, such accidents can be prevented. Bosch offers a sophisticated ABS that helps riders stay in control of their vehicles in situations where they have to apply brakes suddenly. The ABS technology prevents the wheels from locking up and enables them to maintain traction control with the ground so that the rider can retain steering control at all times.

How much of these components was developed and made in India?

The complete Engine Management System was strategized in India and later developed by the team in India with some specific support from our global development network. Majority of the components are produced in India.

Is this the most affordable twin-channel ABS system in India?

This twin-channel ABS is meant for high-end bikes, we are working on twin-channel solutions which can also be offered for the entry and mid-level motorcycle and scooter segments.

What does Bosch hope to learn from a pole to pole ride, with respect to making two-wheelers safer in the country?

Each kilometre ridden adds to a rider’s experience and enables them to be a better rider. With this trip, Bosch aims to understand global attitudes towards safety in comparison with India’s in order to implement the optimum mindset among its audience. Gradually, Bosch would like to see major manufacturers coming out with relatively affordable bikes that have ABS and other safety features implemented.

In a market like India where safety takes a backseat to factors like mileage, value for money and budget, the biggest threat to riders is all the elements, which if neglected, could make the ride unsafe. It has become important to inform the people about the importance of ABS and EMS in bikes and to ultimately make India a safe riding zone for all two-wheelers.