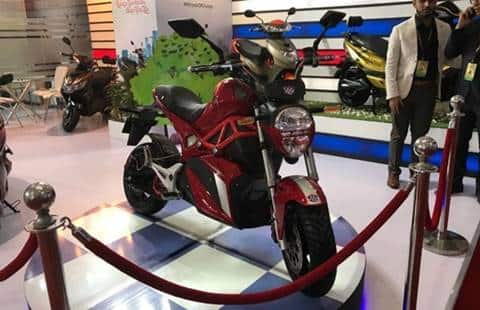 Okinawa has established itself as one of the leading electric scooter makers in India. The Gurugram-based company has a technical collaboration with a Japanese firm for technology. Hence, the name. The company had recently announced that they have a new electric motorcycle in the pipeline. We had a quick chat with Jeetender Sharma, founder of Okinawa Autotech Pvt Ltd, on the motorcycle and other topics.

Jeetender said that the motorcycle is coming to a Okinawa showroom near you by the last quarter of this financial year. The motorcycle is expected to be launched at the Auto Expo. It will be priced below Rs 1 lakh (we assume that to be an ex-showroom price). While the technical specifications aren’t out yet, we could glean a few bits from the conversation. The motorcycle will have a detachable (swappable) Li-ion battery and the range will be 150km. The top speed of the bike will be 100kmph. Fast charging will be supported by this motorcycle. It will also look similar to a petrol-powered motorcycle and Okinawa believes the adoption will thus be a lot easier. The chassis will be new and according to Jeetender, “robust in design”. Okinawa will manufacture this motorcycle at its Bhiwadi facility. As it is, all the scooters too are manufactured here. Speaking of which, last year the company sold 45,000 units and in 2019, they expect to sell 75,000. At present, the Ridge+ is the highest selling scooter for Okinawa, followed by the Praise Pro.

So far, Rs 100 crore have been invested into Okinawa by financial institutions. The investment has gone in to setting up the factory, new product development, R&D, sales and marketing. One main aspect for Okinawa will be to reduce the weight of the battery. With the detachable or swappable battery in place, weight loss will be a major factor. After all, a customer will have to have a heavy build to carry a 20kg (expected) battery if they live on the top floor and without a lift in place. Okinawa is currently in talks with the local battery makers to see how this can be effected. Speaking of which, Okinawa’s recently launched scooter models too have a Li-ion battery.

Another major question is regarding the service of an electric vehicle. How does it happen and costs involved? Jeetender said that all of their 300+ dealerships in India also have an attached service facility. By the end of this year, the number is expected to increase to 450. The first service for the vehicles happens at 400-500km or within 40-50 days whichever is earlier. The second as well as future services are done at 1,500-2,000 kilometres or within 100-110 days thereafter.