Marc Marquez plays the mature hand taking a last minute victory at Misano, Dovizioso finished in second place, both riders are tied in terms of points although Marquez leads by virtue of his fourth place 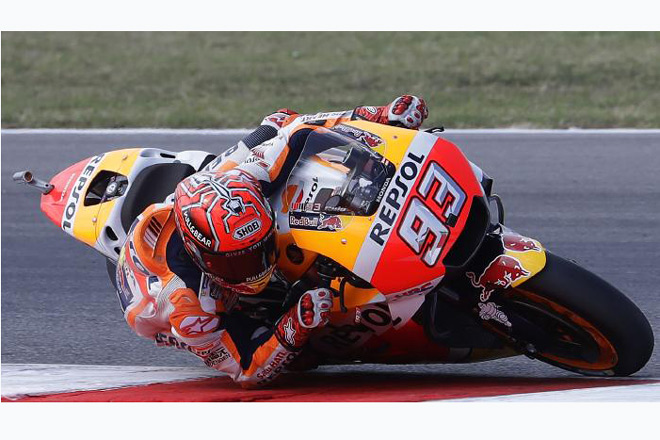 It was Marc Marquez of team Repsol Honda who rose to the occasion in the torrential conditions, taking his fourth outright victory of the season. The GP at Misano World Circuit Marco Simoncelli saw the championship contenders threw everything on the line for overall glory in the front row. However, as the spray cleared, it was Danilo Petrucci of Octo Pramac Racing, just ahead of former championship Marc Marquez. However, Marquez took a dive ahead of him on the last lap, closing a top spot and 25 essential championship points. Which put Marquez back on top of the championship board, tying in terms of points with Ducati’s Andrea Dovizioso. Although Marc Marquez does get the benefit in terms of having more second place positions.

Of course, the San Marino GP started with another Ducati. It was Jorge Lorenzo who got away from the pack as the lights turned, from his spot on row 2. Taking the lead in the first two corners after a brief tussle with Marquez. As the race moved forward, Marquez slotted into second place and Dovizioso in third, with Petrucci working up his charge behind Maverick Vinales. Making the drop on Dovizioso, locking in on Marquez and then taking second place.

Way ahead of the pack, things went horribly for race leader Jorge Lorenzo, who found himself on the high side of his Ducati at turn 6. Leaving Petrucci in the lead with the two of the biggest names in this year’s championship behind him.

As the race turned more and more intense, Dovizioso began to fade more into the background and the two race leader’s duelled for positions. Marquez picked his moment to perfection with a well-timed corner overtake at Turn 1 on the final lap. Leaving Petrucci in second place and Dovizioso for a comfortable third. The third wheel at the title fight, Vinales played it safe and took home the fourth place to secure his title points and championship relevance.