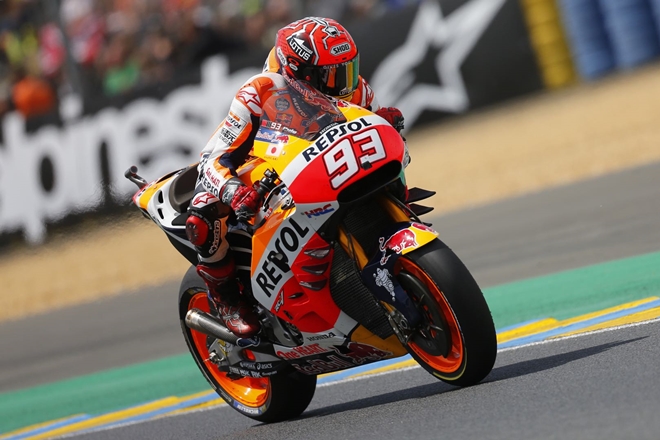 While his championship rival struggled to 13th place Marc Marquez took a decisive step towards a victory at the Phillip Island GP in Australia. Taking the top spot on the podium and 25 points, while Ducati’s Andrea Dovizioso took home only three for his thirteenth place finish. For the Ducati rider, this finish would be devastating to his championship campaign after he closed his deficit on Marquez at the last race at Motegi. Reigning Champion Marquez now leads by 33 points with only two rounds to go, which means that Andrea Dovizioso will have to pull off two podiums at the very least to even be a threat to the MM93s fourth premier class crown.

The race started with Aussie Miller taking the front of the pack but soon dropped back behind a charging stampede of Marquez, Vinales, Rossi, Iannone and Pol Espargo on the KTM.Meanwhile, the forward runners, were out with all guns blazing, rough up each other’s tailpipes, contact upon contact between Marquez, Rossi and Zarco as they battled it out for the lead.

Through the course of the laps, Movistar Yamaha’s Valentino Rossi got ahead faster than Johann Zarco on the satellite machine to take second place, and was soon followed by his team mate Maverick Vinales out-running Zarco on the blast to the line to take thrid place on the final lap. In fifth place behind Johaan Zarco, it was Britain’s Cal Crutchlow on the LCR Honda ahead of Ecstar Suzuki’s Andrea Iannone, with home hero Jack Miller on the 00 Marc VDS Honda taking seventh on his first campaign since his injury.
Crutchlow got the better of Iannone for fifth, with Miller and Alex Rins the top eight. KTM pair Pol Espargaro and Bradley Smith completed the top ten. Scott Redding on the Pramac Ducati and Repsol Honda’s Dani Pedrosa both slipstreamed past Dovizioso on the run to the finishing line on the final lap, dropping the Ducati Rider to 13th place.Jorge Lorenzo sealed the final championship in 15th place behind Aspar’s Karel Abraham.