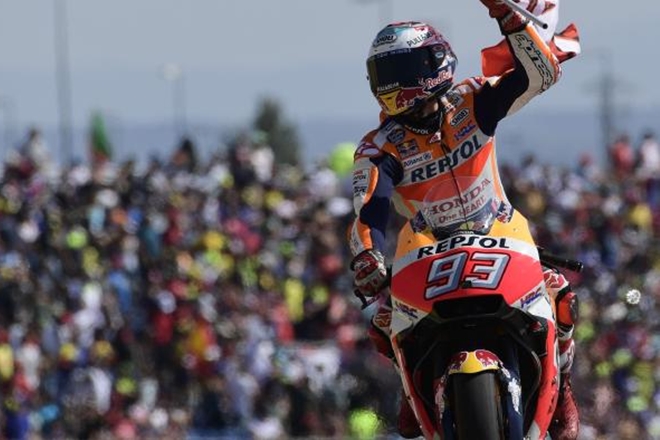 Marc Marquez has broken 16 points clear at the top of the MotoGP World Championship after fighting his way through the field for a victory in Sunday’s Aragon MotoGP.Repsol Honda’s Marc Marquez took a crucial win to break 16 points clear of Andrea Dovizioso, at the Aragon MotoGP. The win saw the Spaniard fight his way through the pack to take the ultimate victory, starting in fifth place from pole after a crash in qualifying. The twenty-three lap race saw him claw his way through the pack besting Andrea Dovizioso, the still recovering Valentino Rossi and finally Ducati’s Jorge Lorenzo taking front place on lap 16. While it may sound rather smooth, it seemed like Marquez had a point to prove and would not head home before it was proven, running the ragged edge of every line often finding himself to close to the edge for comfort. One such incident almost had him take out Lorenzo, and Rossi in one fail sweep, he managed to recover it only to lose two positions to his rival.

In the end, for Lorenzo it boiled down to a poor choice of soft tyres, that just could not match the hard tyres on the Honda in terms of endurance. Swinging the momentum in favour of Marc Marquez. Meanwhile, Dani Pedrosa had an exceptional race as well on the other Repsol Honda, progressing from sixth place to pass Lorenzo with just three laps to go. However, for Jorge Lorenzo, it still was his best outing on the Ducati yet.

Team-mate Dovi too didn’t have much of an outing at all, after losing pace to the first four, thanks to another soft rear bungle up, he came under attack from the aspiration bunch. First losing his place, to Dani Pedrosa’s Honda and then finding himself in the rear-views of Maverick Vinales, and even Aprilia Aleix Espargaro to finish in seventh place overall. However, hearts at Aragon were with the GOAT, Valentino Rossi, back in the front row just 23 days after breaking his right tibia and fibula. He even defended his podium spot for more than half of the race. Finishing half a second behind Maverick Vinales, his team-mate.The net result of this means that Marquez who started the race tied with Dovi is now 16 points clear of the man on the Ducati. Ahead of next month’s race in Japan. Vinales has dropped 28 points back, while Rossi has lost fourth to Pedrosa.