Lipstick under my helmet: From the eyes of a woman motorcyclist

So, why the big fuss over women motocyclists? 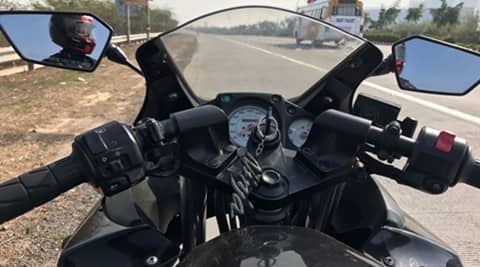 It’s a bird, it’s a plane, it could be a UFO and that would perhaps not generate an awe as big as it does when people see a woman ride a motorcycle in India. It shouldn’t be that big a deal, but I mostly receive a wide-eyed response when I lift the visor up and people find out ‘It’s a woman!’ So, why the big fuss? I can trace my love for motorcycles back to my father’s Yezdi and then to his second one, a Royal Enfield Classic. And to seal the deal, I have a crazy motorcycling enthusiast for a brother. He would talk motorcycles, eat and sleep motorcycles. Back then I was too little to think that riding a bike was going to be any different for me than anyone else. I just wanted to ride one someday. But growing up, even a mention about me riding a motorcycle never gathered much support in my family. “Motorcyles are heavy, they are powerful, they have tricky gearboxes,” – in short, they aren’t meant for women. I have heard so many rants against women motorcyclists that there was once a time, I was convinced that bikes really were uncontrollable monsters.

Stereotypes revolving around female drivers are pretty strong – ‘climb to safety if you see one’. Sorry ladies but, ’tis true. Even with urban myths like these around, a car is a preferred choice for a woman. Why? Because it is safer to be inside one than be outside it. And then there’s the despise against manual gearboxes, forcing women to consider an automatic scooter over a motorcycle. Two-wheeler manufacturers have created an elaborate euphoria around how a scooty is an ideal personal transportation for women, with ads and campaigns directed towards female users. Just recently, it was the International Women’s Day on March 8, and brands that manufacture scooters obviously did advertisements dedicated to women.

Though the scenario is changing now. There are more female riders now than there used to be. Type ‘woman rider in India’ on Google and you will see a long list of women are now embracing the motorcycle. Harley Davidson actually has an all women group, who roll out in sync on roads. Some ladies have also taken to stunt riding, some go for tours clocking thousands of kilometres on their bike’s trip metres.

But it is not all fun and games if a woman does take to riding a motorcycle. While there are some who speak of how impressed they are, there is also a crop who will unleash a stereotypical wrath against the lady. I’ve been subjected negative comments from people who don’t know me personally, who have never ridden besides me. Comments like “don’t drop the bike”, “you don’t know how to ride”, “it’s people like you who cause accidents on the road”. I don’t mean to lift a flag for feminism, but yes, all these comments come from men.

Why is that? I must ask you. Do you get off the plane when the captain of your flight is a woman? Do you think the women in your family should be deprived of driving or riding? Aren’t the two names out of the only three Indian astronauts female? The last one maybe a bit off topic, but interesting.

It has got nothing to do with the never ending girl-boy battle. It is also not a platform for women to ‘prove themselves’. The sole reason why I learned to ride a motorcycle was that I wanted to. That’s it! There’s no women empowerment behind my actions, no ‘I’m going to stand out of the crowd’ intention, no ‘Must prove I’m better than a boy’ objective. I saw my Dad’s Royal Enfield and I just wanted to ride it when I grew up. Although my choice of motorcycle grew in a different way. Turns out I’m not a big fan of the torquey single cylinder. Hero Honda Karizma was my training horse, then I moved on to the Royal Enfield Thunderbird, and now I am living happily ever after with a Kawasaki Ninja 250R.

In my mind, the Ninja is my sensei. My motorcycle gives me a sense of purpose, a feeling of freedom, a strong companionship, and these emotions are just as strong as they’d be in a man. I find it incredibly obnoxious that I have to say this to let others know that my bike is not a joke to me.