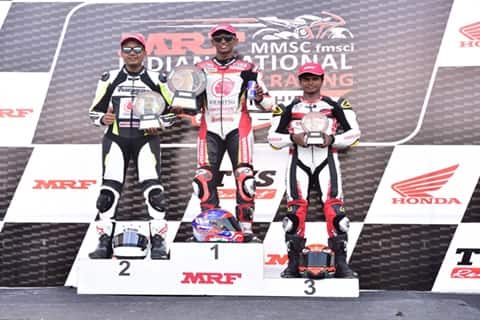 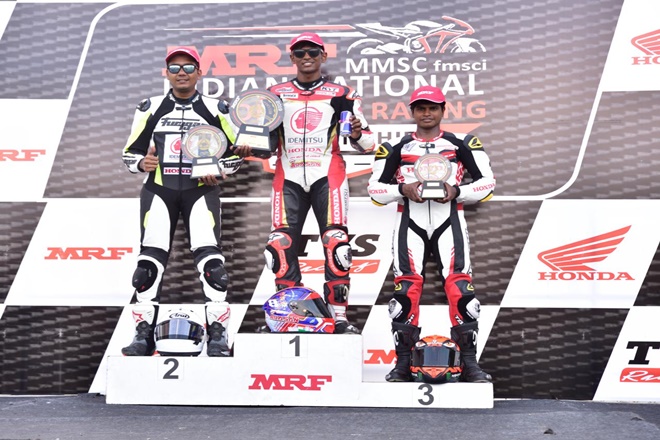 It was an action-packed weekend at MMRT racetrack in Chennai. The Round 4 of the MMSC FMSCI Indian National Motorcycle Racing Championship 2019 saw some brilliant performances with several ones coming from IDEMITSU Honda Ten10 Racing team as well. The team proved its mettle in both Pro stock 165cc class and Pro-stock 201-300cc class. The PS 165cc class witnessed Rajiv winning his sixth race straight in a row while Sarath Kumar and Kannan trailed him closely. With his blistering performance, Rajiv has earned a total of 150 points and has a 56 point lead over Sarath who is running second. On the other hand, the Pro-stock 201-300 class saw Anish Shetty clinching the top spot while Abhishek V and Aravind B finished second and third respectively. Anish’s performance today made him achieve his fifth consecutive win with a total time of 16:08.27. Speaking of the team position, IDEMITSU Honda Ten10 Racing team is currently leading with 304 points. 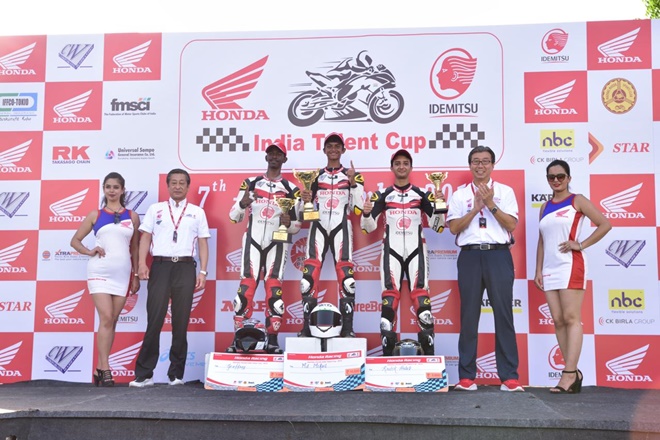 The Race 2 of the Indian National Motorcycle Racing Championship saw Sarath leading from first to the third lap. Soon after, Rajiv took the charge in the fourth lap only to see Sarath reversing his gains in the next lap. This continued till the final lap when Rajiv made a quick overtake with a total lap time of 16:04:365 leading ahead of Sarath with a slight margin of 0.343 seconds. On the other hand, K. Kannan came third with a total time of 16:17.731 seconds.

Things were equally interesting in the IDEMITSU Honda Talent Cup in which 15-year-old Md Mikail clinched his 6th NSF win and set the fastest lap time ever of 1:47.823 at MMRT Chennai in the 250cc category. After today’s race, Mikail currently leads NSF250R championship with 150 points. Following him are Kavin Quintal with 102 points, Kritik Habib with 94 points, Varoon with 85 points and Geoffrey with 79 points. 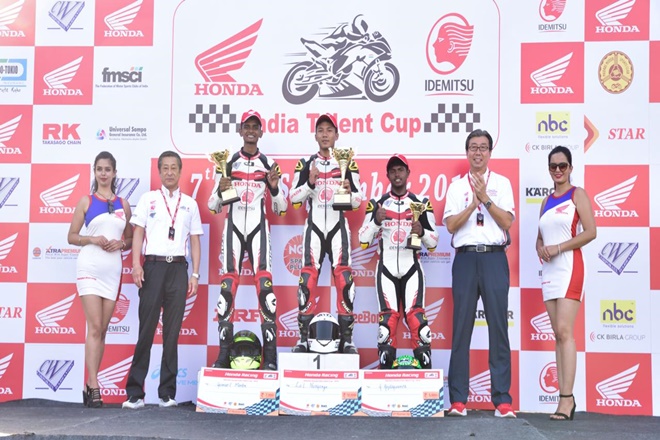 Now coming to the CBR150R class, the said race saw repeated brilliant performances by the top three riders of yesterday’s race. Lal Nunsanga started fourth and climbed to the first position in the first lap itself after which he maintained his dominance till he reached the finish line with a total time of 13:13.907. Samuel Martin finished second followed by S Rajdaswanth at third. After this round, Lal Nunsanga is currently leading the CBR150R class with 161 points followed by Samuel Martin with 138 points and Lalrinuala Tlau with 123 points. The fourth and fifth positions are currently held by S Rajdaswanth with 86 points and S Deepak Kumar with 71 points respectively.

Honda brings the Moto3 spec NSF250R race bike this season and the aim is to train Indian riders on a global level machine. In order to benefit more and more riders, the company will be expanding its Honda Talent Hunt program to numerous more cities in the months to come. Moreover, Honda aims to promote motorsports through its 6,000 touchpoints across India. Interested riders who want to start racing can contact the Honda Ten10 Racing team through its official social media handles or visit the company’s official website for more information.