Yezdi Roadking may very well be resurrected as a modern-day scrambler that will go on to challenge the likes of Husqvarna Svartpilen 250 and Honda CB350RS in the segment. Here’s why we think so! Classic Legends is busy with a lot of things these days. Recently, the brand announced its expansion plans for India and said that its aim is to set up 500 dealerships in the country in the next 12 months. Now, in another development, the name ‘Yezdi Roadking’ has been applied for trademark in India. The government’s website however states that the trademark has not been passed as of now and the status says – ‘Rectification filed’. Apart from the Yezdi Roadking name, the website name yezdiroadking.com has also been applied for trademark registration. The said names that were filed a few years back can be used till 2024 as per the trademark registry. Now, the news of Yezdi’s resurrection is not something that is very much new. 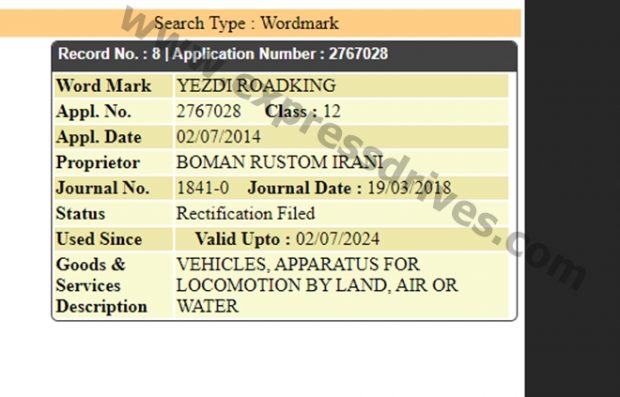 If you remember, a few months back, a Yezdi test mule was spotted testing on Indian roads. The said model was inclined towards scrambler philosophy and hence, got bits like chopped off front fender along with a rear tyre hugger. Moreover, the test mule was seen with fork gaiters upfront. Most importantly, the engine casing had stripes that exactly matched with the ones on the Yezdi of the past. However, with the unfinished exhaust set up, it was clear that the bike was quite far from the final production stage.

All said and done, there is a healthy possibility that the Yezdi Roadking will make its comeback as a modern-day scrambler that will go up against the likes of the Husqvarna Svartpilen 250 and also, the Honda CB350RS in the segment. Now, coming to the question – when can we finally see a resurrected Yezdi again in the market? Well, as already mentioned, the trademark has still not been passed and this only means that the launch is still some time away. More details on the Yezdi Roadking expected to spill soon, so keep watching this space for all the dope!