The semi-conductor shortage combined with the rising cost of ownership resulted in yet another month where the PV sales numbers continued dropping. 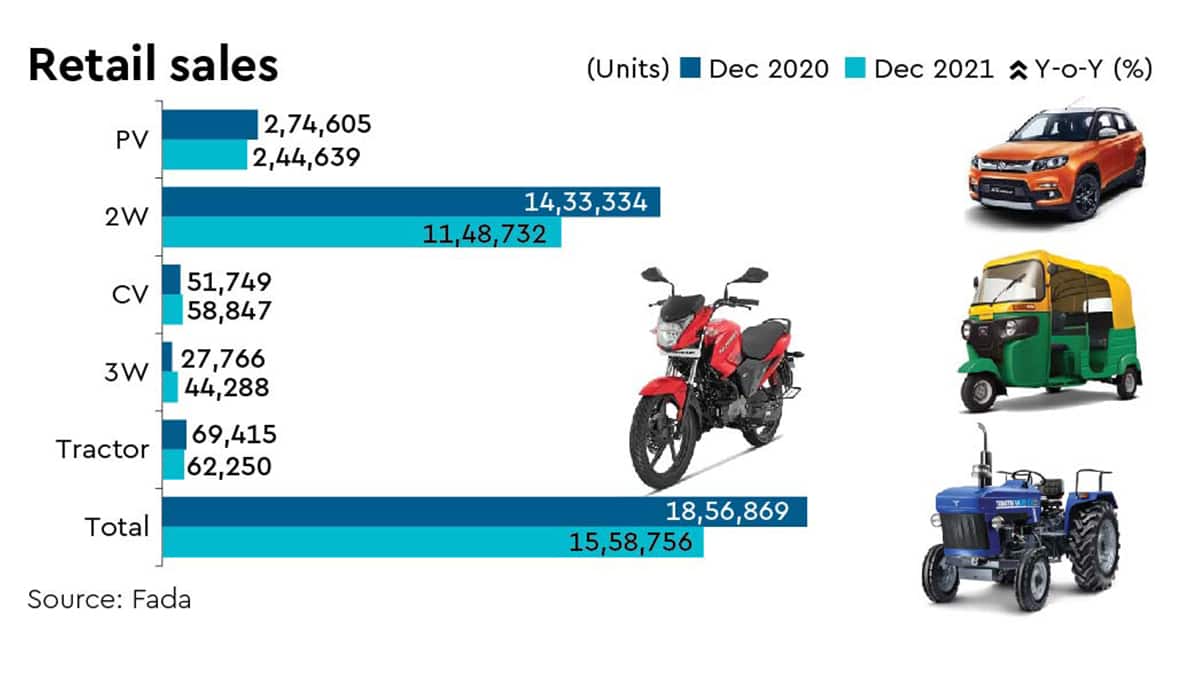 Retail auto sales continued the declining spree with overall numbers falling 16.05 per cent y-o-y in December to 15,58,756 units, according to data released by Federation of Automobile Dealers Associations (Fada) on Wednesday. Passenger vehicle (PV) segment continued to face headwinds due to semiconductor shortage while the two-wheeler (2W) segment is yet to tide over hurdle of high ownership cost.

The PV retails dropped 10.91 per cent y-o-y to 2,44,639 units. While the original equipment manufacturers (OEMs) usually offer attractive year-end cash discounts in December to clear stocks, the supply-side bottlenecks prevented them from doing so this time around as the stocks were already low, although the demand was relatively strong, which is evident from high bookings and long waiting period on popular models.

Two-wheelers sales declined 19.86 per cent y-o-y to 11,48,732 units. The segment has been hit hard by the cost of ownership going up due to multiple price hikes by OEMs, and high fuel price.

At the end of December 2021, the average inventory for passenger vehicles was from 8 to 10 days, and for two-wheelers, it was from 30 to 32 days, as per Fada data.

The commercial vehicle segment continued with its recovery momentum with retails rising 13.72 per cent y-o-y to 58,847 units. While MCVs and HCVs fared better than LCVs, the segment, on the whole, was aided by a low base. The three-wheeler segment also saw sales jumping 59.50 per cent y-o-y to 44,288 units during the month. However, tractor sales fell 10.32 per cent y-o-y to 62,250 units.

Regarding the near term outlook, Fada said that with various state governments once again announcing Covid restrictions, and work and education from home resuming, there will be a negative effect on auto retail.