6 evergreen scooter, bike ads from the 90s: A trip down the memory lane amid Covid-19 lockdown!

Want to feel a bit nostalgic amid this Covid-19 lockdown? Let us make you revisit the 90s era with these immensely popular bike and scooter advertisements. 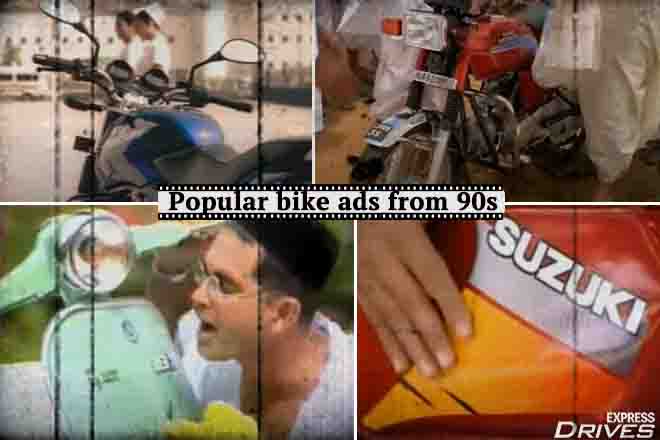 The ongoing Covid-19 lockdown in India has now been extended till 3rd of May. If you are a true blue motorist, we completely understand your pain of not being able to ride your two/four-wheeler. Previously, we came up with multiple stories with a focus on what car or motorcycle enthusiasts can do amid this situation. These included bike and car maintenance along with shows and movies to watch in order to kill time. Now, you must have definitely heard this phrase, ‘if you are born in 90s, then your childhood was awesome’. In order to justify this statement in a better way, today we bring you some of the iconic bike and scooter advertisements from the 1990s that are remembered even today.

This is certainly one of the best advertisement campaigns from the 90s and Bajaj Auto’s tagline ‘Hamara Bajaj’ got immensely popular in the following years. The keywords of the advert meant ‘Our Bajaj’ which gave a sense of affinity to the audience. The advertisement was so popular that a few months back, Bajaj Auto also played it during the return of the Chetak brand with the Chetak electric scooter.  One can see a man cleaning up his scooter in the ad towards the end and the company tried to represent Bajaj as the face of a strong nation. Video source: Shesh9717

Now again, this one is also one of the most remembered ads of its time. The fact that Hero Honda used the ‘India -connection’ for this campaign worked in its favour. This ad showed people’s pride in owning a two-wheeler by Hero Honda. In the ad, you can see multiple Hero Honda motorcycles like the CBZ, CD100 and more that were quite hit during the 90s era. Another big reason behind the success of the advertisement is the ‘Desh ki Dhadkan’ track in the background which in itself gave a sense of pride for India. Video source: Ankur Yadav

This one is was a witty advertisement. The company tried to portray the Suzuki Samurai as the ‘No Problem’ bike. With this, Suzuki tried to address that the owner of this motorcycle won’t be having any problems. Later on, ‘Suzuki Samurai No Problem’ also became quite a popular and funny phrase, especially among the youngsters. Do you remember seeing this ad on television? Video source: Guruprasad Gp

Luna was a quite popular 50cc moped made by Kinetic back in the year 1972. The journey of the Kinetic Luna was an interesting one and the same came to an end in the year 2000. The company released an advertisement with the signature tagline of ‘Chal Meri Luna’. The ad shows a frustrated employee (also annoyed by his wife) finds a way of making things a bit interesting by purchasing a Kinetic Luna. The advertisement was aimed at giving out a message that the Kinetic Luna is not only cost-effective but also is quite durable. Video source: 1368khz

Remember that famous and popular ad in which two nurses take the wraps off a motorcycle inside a hospital and yell – ‘Its a boy! Its a boy!’ Well, that was quite a great idea to represent the Bajaj Pulsar as a sign of masculinity. The ad was throughout interesting and in the end, one can see the handle of the bike turning towards the direction in which the nurses were walking. It looked as if the bike is quite interested in keenly watching them go. Well, a typical male trait!? And hence, the tagline – Definitely Male. Video source: BajajAutoLtd

This popular tagline of ‘Fill it, Shut it, Forget it!’ was used for the CD100 which was a rather humble yet appealing-looking commuter by Hero Honda. The ad simply shows a rider getting his bike refueled and then going on a ride. As you must have figured out from the tagline, Hero Honda sent out a message with this ad that the CD100 has a decent fuel efficiency, 80 kmpl to be precise (claimed figure). Video source: The Auto Guy