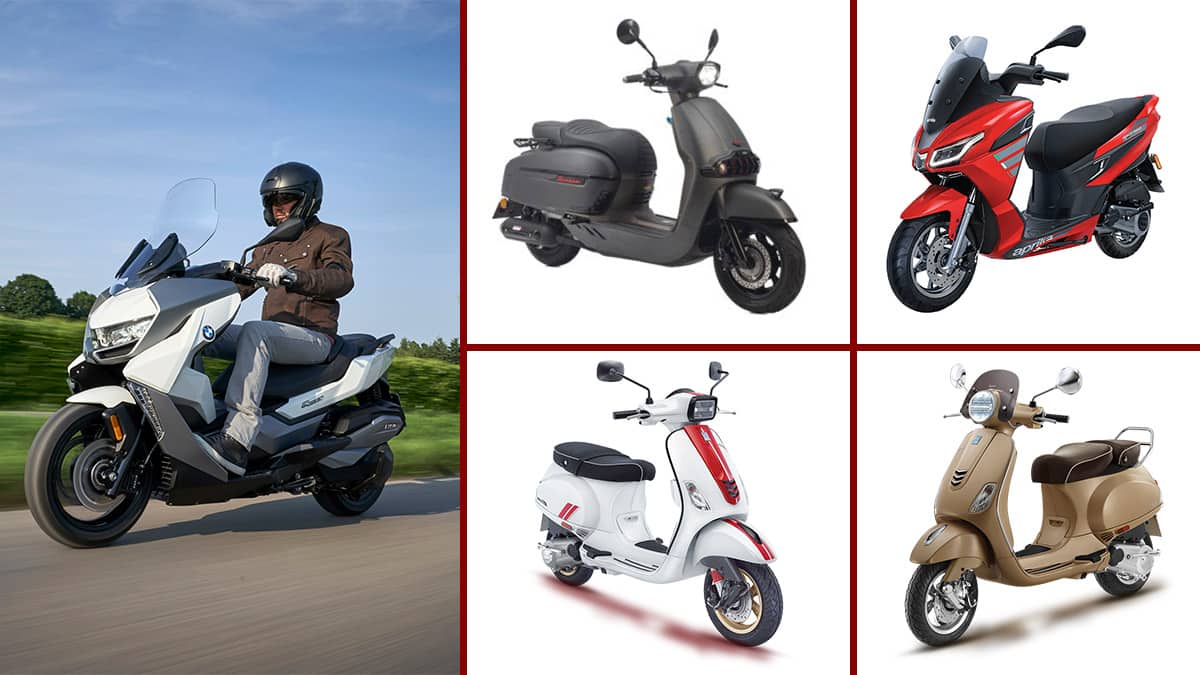 In India, scooters are mostly thought of as a practical means of commuting for people who either want to easily carry their belongings and bags or want something that is easy to ride. As such, they mostly appeal to a segment of the market that is budget conscious and pragmatic with their purchases. However, that does not stop manufacturers from making some daring moves and bringing in expensive, feature-loaded and niche products into the fray. Here are five of the most expensive scooters that one can buy in India.

We start off the list with an entry from Aprilia. Not too long ago, the Italian brand was selling some of the most expensive scooters in India but has been bested in that regard since. Now, their most expensive scooter in India is the SXR 160, a maxi-scooter with a 160cc engine that produces 10.7bhp of peak power. Being a maxi-scooter, the SXR 160 comes with an imposing front fascia that gets smart LED DRLs and headlamps along with a tall windscreen. It rides on 12-inch alloy wheels with tubeless tyres. The long seat cushion provides comfortable seating for two and the suspension provides ample cushioning over bad roads.

The Vespa Racing Sixties is all about race-inspired aesthetics. It comes in a 125cc and a 150cc version, with the latter costing a little more than 1.5 lakh (ex-showroom). The scooter comes draped in an eye-catching white paint with red highlights. Furthermore, the alloys are golden in colour and the rectangular headlamp invokes a feeling of nostalgia. The 150cc, three-valve engine makes a healthy 10.3bhp of peak power and 10.6Nm of peak torque. To bring the scooter to a halt, Vespa has equipped it with a disc brake in the front and ABS. The analogue portion of the scooter’s semi-digital instrument cluster also mimics the red and white colour scheme and gets a small digital display illuminated in red.

Costing a few thousand rupees more than the Racing Sixties 150 is the Elegante 150 FL. This scooter also gets the same 150cc engine and has identical power and torque output. The Elegante, however, goes for a more subdued design. Some standout design elements of the scooter are the large C-shaped windscreen around the circular headlamp and a two-piece seat. It also gets a semi-digital instrument cluster and disc brakes with ABS at the front.

Keeway is a new name in the Indian automotive landscape and is a sister company of Benelli. The Hungary-based two-wheeler maker announced its entry into India last month by showcasing three products. Two of these three products were 300cc scooters – Sixties 300i and Vieste 300. While Keeway Sixties 300i is a retro-style scooter, the Vieste 300 is a modern maxi-scooter. Both vehicles have been launched at Rs 2.99 lakh (ex-showroom) and will be sold through Benelli dealerships in India.

Finally, we come to the most expensive entry on the list, the BMW C 400 GT. Not only is the price much more than the second most expensive entry on the list, but the C 400 GT is also even more expensive than some compact SUVs! It is undoubtedly the most aggressive looking scooter on the list with countless share lines and edges. The star of the show is the 350cc, single-cylinder, water-cooled motor that can put out 33.5bhp and 35Nm. The figures might not be as high as what one might expect after paying north of Rs 10 lakh but the scooter is surely a unique proposition in the market. It even gets a capable full-colour TFT display with support for smartphone connectivity and turn-by-turn navigation as an option.

Also Read
In images: 10 of the most expensive cars on Earth! (May 2022) | The Financial Express