TVS Motor Company keeps updating its products from time to time to keep them fresh and stay ahead of its rivals. Just a few weeks ago, the company launched the updated Apache RTR 160 4V. Now, in line with the design language of its 160cc streetfighter, TVS has launched the new Apache RTR 200 4V. This motorcycle is now also more powerful than before. The price of the new 2022 TVS Apache RTR 200 4V starts in India at Rs 1.33 lakh for the single-channel ABS variant, ex-showroom Delhi. 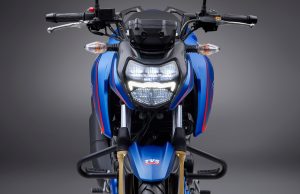 Talking about the changes, the new Apache RTR 200 4V gets an updated headlamp assembly, just like the new RTR 160 4V. This 200cc naked streetfighter features a blacked-out assembly for the headlamp along with a new signature LED DRL in the middle that gives it a more sporty appeal. Apart from the headlamp set-up, the rest of the cosmetic bits remain the same as before and the Apache RTR 200 4V continues to remain the most feature-rich motorcycle in its class.

Talking about engine specs, the TVS Apache RTR 200 4V gets a 197.75 cc, single-cylinder, 4-stroke, oil-cooled, fuel-injected engine that now develops more power and torque than before. It churns out 20.53 hp of power at 9,000 RPM and 17.25 Nm of peak torque at 7,800 RPM. The engine comes mated to a 5-speed manual gearbox. In terms of features, it gets an all-digital instrument cluster with TVS’ SmartXonnect system. Some other first-in-class features include three riding modes: Sport, Urban, and Rain, adjustable brake and clutch levers, etc. 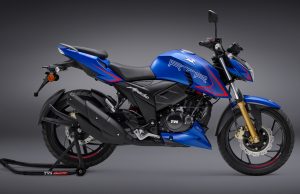 The TVS Apache RTR 200 4V gets Showa forks at the front with pre-load adjustment and a mono-shock absorber at the rear. It gets disc brakes at either end and one can choose between single/dual-channel ABS variants. The new 2022 TVS Apache RTR 200 4V will be available in three colours, namely Gloss Black, Pearl White, and Matte Blue. It has received a nominal price hike of just around Rs 800 and its single-channel ABS variant has been priced at Rs 1.33 lakh while the dual-channel ABS model will retail for Rs 1.38, ex-showroom Delhi.