2017 Japanese MotoGP: Andrea Dovizioso takes the victory in the rain at Motegi

The 2017 Japanese Moto GP saw the fight between the two strongest contenders for the championship title take-on another all-in battle in the wet, with Andrea Dovisiozo edging out the victory on the last lap. 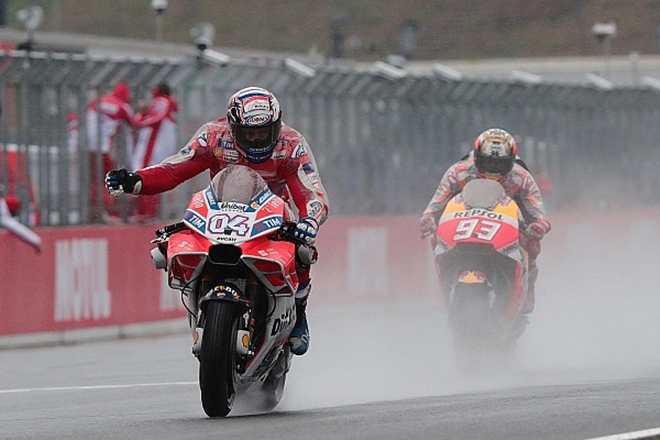 The dogfight for points between Honda’s Marc Marquez and Ducati’s Dovizioso continued at the Japanese MotoGP. With Dovi taking the ultimate victory in the wet at Motegi. Mid-race the two biggest contenders for the 2017 crown edged away from the pack and launched headfirst into a battle royale for ultimate glory. Throwback of sorts of their epic battle at the Red Bull Ring earlier this year in which Dovizioso came out on top. Marquez looked like he had everything in his hands, until Marques found the end of adhesion at turn 8, resulting in a major wobble. Dovi seized the opportunity making the kill-move on Marquez three corners later in turn 11. Not one to just concede a victory, Marc Marquez fought tooth and nail right up until the last corner. Running wide, allowing Dovizioso to score his fifth win of the season by the 0.249s from the reigning champion.

Danilo Petrucci enjoyed a lengthy spell in the lead early on, setting apart from the pack with 1.9 seconds by the end of the fourth lap with the help of the extra-soft rear tyre. The Pramac Ducati rider couldn’t keep his pace up and was soon reeled in. The Italian was then passed by Marquez and Dovizioso on laps 13 and 14 respectively.

Once Petrucci was out of contention Dovizioso hovered around the half-second mark until the latter made his first attack on lap 19, grabbing the lead at Turn 5. Dovi’s lead of eight-tenths of a second was closed by Marquez with three laps to go with the Spaniard taking the win at the end of a thrilling showdown. They went round for round on the same lap with Dovizioso making another kill move at Turn 6.