Auto Expo 2018 will have Suzuki as one of the main participants and the company is all set to showcase some exciting two-wheelers at the biennial event. Out of all the showcases, the GSX-250R aka Gixxer 250 and the all-new Swish will be the most awaited ones. Here are all such two-wheelers that are expected to grace the company’s booth at the exhibition. 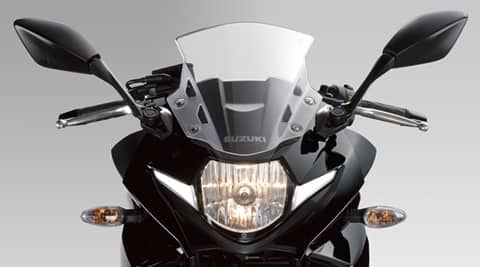 Auto Expo 2018 will be taking place in the coming weeks and there will be a lot of happening at this edition of Asia’s largest motoring exhibition. Suzuki had hinted its aggressive product strategy for the Indian two-wheeler market in October last year. The Japanese manufacturer had announced that it will launch two bikes and scooters each year in the country. After the launch of Suzuki Gixxer twins, the company did not launch anything very exciting in India and hence, there are high hopes from the manufacturer for the biennial event. To start with, the company might showcase the highly awaited GSX-250R aka Gixxer 250 at this year’s Auto Expo and if that happens, the bike will be one of the most exciting products at Suzuki’s booth. Besides, the company will most likely bring its revamped Swish 125 scooter that was showcased at 2017 Tokyo Motor Show. Here is the list of Suzuki bikes and scooters that are expected to appear at Auto Expo 2018.

Suzuki might launch the highly awaited GSX-250R at the coming Auto Expo 2018. With the growing competition in the segment, the company would love to take the opportunity of sharing a space in the said territory. Powering the Suzuki GSX-250R is a 248cc, twin cylinder engine mated to a six-speed gearbox. The engine is good for developing a maximum power output of 25 hp along with a peak torque of 23 Nm. Prime highlights of the Suzuki Gixxer 250 motorcycle include full digital instrument cluster, ABS (Anti-Lock Braking System) and a lot more. The bike is expected to be priced in India at under Rs 3 lakh (ex-showroom).

The all-new Suzuki Swish 125 is based on a new design language and it looks significantly different in comparison to the previous model. The production of the scooter had been stopped in India as the company had to meet the high demand for the Access 125. The new Swish 125 gets its power from a 124cc, SOHC, air-cooled engine mated to an automatic transmission. The carbureted mill churns out respective power and torque outputs of 8.5 hp and 10.2 Nm. The scooter will challenge the likes of upcoming Aprilia SR 125 and Honda Activa 125 in the Indian two-wheeler market.

The company has plans to launch the Suzuki GSX-S750 streetfighter in the Indian two-wheeler market at Auto Expo 2018. The GSX-S750 sources its power from a 749cc, inline four-cylinder engine mated to a six-speed gearbox. The fuel injected motor is good for producing respective power and torque of 113 hp and 80 Nm. Prime highlights of the upcoming Suzuki GSX-S750 include an ABS (Anti-Lock Braking System) and a multi-level traction control system. Braking is done with the help of twin 310mm disc brakes at the front along with a single 220mm disc brake at the rear.

There are reports on the internet that the company will launch the V-Strom 650 just after the Auto Expo 2018 in March. The middleweight adventure-tourer draws its power from a 645cc, V-twin engine mated to a six-speed transmission system. The upcoming Suzuki V-Strom 650 might arrive in India via the Completely Knocked Down route and hence, competitive pricing is expected. Having said that, the motorcycle is expected to be launched here at a price of close to Rs 6 lakh (ex-showroom). Braking to the V-Strom is taken care of with the help of twin 310mm disc brakes at the front along with a 260mm disc brake at the rear and these come linked to an ABS (Anti-Lock Braking System) for added safety and convenience.