Youre Chinese, not Japanese, so do not worry, says IMF

Written by Sharad Raghavan | Sunil Jain | New Delhi | Updated: Apr 13 2011, 08:25am hrs
The Japanese messed up. And they had other problems like massively excess credit going to real estate. You dont have the same problems, and youre more efficient, so dont worry. That, in a nutshell, is what the IMF is telling the Chinese government in an attempt to convince it that revaluing the renminbi will not lead to a loss of growth of the kind that happened to Japan, for several decades, after it revalued the yen sharply in the mid-80s. The lay view, for many years, has been that Japan bowed to US pressure in 1985 and appreciated its currency as is the situation now, this would boost demand in non-US markets, and help the US grow and this is what led to the lost decades. 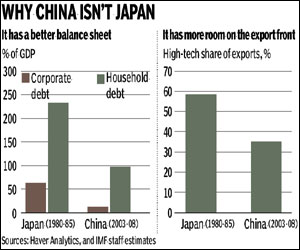 A box in the latest World Economic Outlook (WEO) explains how the Japanese government got it totally wrong following the Plaza Accord in September 1985 which resulted in the yen appreciating 46% in 15 months Germany appreciated the deutsche mark by a similar amount, but didnt suffer a similar loss of growth, the WEO argues, to clinch its case.

Itll be interesting to see if the Chinese are convinced by this latest argument, but even trenchant critics of the IMF agree with its China-Japan arguments. Planning Commission member Saumitra Chaudhuri believes the IMF worsened the east Asian crisis by wanting to allow banks to fail, but adopted a different (though correct) approach in the US financial crisis. On Japan, however, he says, Both Japan and Germany revalued by similar amounts but Germany didnt suffer there was excessive credit growth in Japan and its banks didnt want to clean up their books Japan allowed the real estate bubble to build up ...

The IMF makes the following points as to why China isnt a Japan:

* After Japans export and GDP growth got hit by the huge appreciation in 1986, the Japanese panicked and, so a large fiscal stimulus was begun and interest rates were lowered sharply an estimate quoted by the IMF says real interest rates were 4 percentage points too low in 1986-88.

* As in the US now, banks in Japan were very leveraged; what made things worse was that the collateral for loans was land, so a fall in land prices hit the banking system badly.

* The Japanese authorities took forever to recognise the problem.

Having pointed out where Japan went wrong, the IMF argues China is different since its banks and corporates are nowhere as leveraged (see graph); two, since Chinas exports arent as high-tech as Japans were, it has a lot of scope to increase exports even if the renminbi appreciates by increasing their quality/value-add. Lastly, it argues, since China controls its currency unlike Japan, its unlikely it will allow an appreciation thats so fast it will hit its growth.

Ficci director-general Rajiv Kumar adds, There is no comparison between the two. Japan was forced to appreciate and China resisted. China says that it has learnt from the Plaza Accord, and will not make the same mistakes as Japan did. In any case, he adds, China used its fiscal stimulus sensibly, to build infrastructure, and not raise up housing prices.

DK Joshi, chief economist with rating firm Crisil agrees when he says, The contexts are very different (between China now and Japan then). Chinas trade competitiveness will go down, but the change will be slow and gradual. Not in the manner that happened in Japan. As for asset bubbles, he says China has been proactive in dealing with asset bubbles. The last time they had a bubble, when housing prices went up, they handled it well, brought it down to manageable levels.