Why FSLRC wants a bigger role for FSDC

Though the commission has suggested unification of financial sector regulators, it has fallen short of recommending a single unified regulator, envisaging RBI to continue to be the banking sector regulator 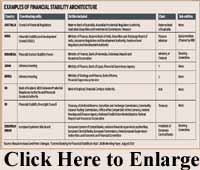 The commission envisages a new regulatory architecture for monitoring of systemic risk in the form of a council of regulatory agencies for India. Importantly, it envisages placing the existing body inside the ministry of financeFinancial Stability and Development Council (FSDC)on a much sounder legal footing, with well-defined powers and responsibilities in the area of systemic risk oversight. It will be a statutory body, and will have operational and financial autonomy. FSDC (with an in-house Financial Data Management Centre) will be the single agency responsible for aggregating data from different regulators and maintaining it in electronic form.

In addition to being the data tsar, other tasks assigned to FSDC will include research and analysis; identification and designation of systemically important financial institutions (SIFIs), including conglomerates; formulation and implementation of system-wide measures for mitigation of systemic risk such as counter-cyclical capital buffers; inter-regulatory agency coordination; and crisis management. While the first four tasks will be exclusively assigned to FSDC, the last one would be carried out under the supervision of the ministry of finance.

The FSLRC recommendation for developing a well-articulated framework for systemic risk oversight is a major step towards modernisation of regulatory architecture of the Indian financial sector and bringing it in line with the ever-evolving global environment. The financial world is becoming increasingly complex. Although financial crises have been pervasive throughout history, it is now well-documented that their frequency and severity in recent decades has increased dramatically. Therefore, the need for systematic thinking on policies to mitigate systemic risks has become almost imperative. The FSLRC needs to be lauded for emphasising the need for thinking seriously on this front in the context of India. Constructing a centralised database encompassing all financial sector activities and its frequent monitoring can go a long way towards efficient oversight and crisis prevention.

Why this particular regulatory structure In order to get a perspective on this, it might be useful to look at international practices. Internationally, the institutional landscape for ensuring financial stability of an economy has itself undergone many changes. Most central banks have been traditionally performing the function of systemic risk oversight, even without being explicitly mandated to do so in certain jurisdictions. After the financial crisis of 2008-09, the need for a strong system-wide financial stability regulator, which could make an independent and objective assessment of the financial situation, was felt and this ushered in an era of reforms in this area. Three possible modes of financial stability regulation have evolved (see table).

The first is a completely consolidated regulator for financial stability, such as in Singapore where Singapores central bank, the Monetary Authority of Singapore, has the authority to regulate the banking, securities, futures and insurance industries. The second mode is through the central bank of a country playing the role of financial stability regulator with macro-prudential supervisory and regulatory powers, such as in the UK, which has recently established a Financial Policy Committee located within the Bank of England entrusted with the task of systemic oversight. A third way financial stability regulatory framework is organised is through a coordination mechanism in the form of a council comprising of finance ministry and financial sector regulators, serving as coordinator for regulatory and stability issues for the financial sector as a whole, such as in Australia, the US and the EU. This council structure is statutory in some countries and non-statutory in others. These models for a financial stability structure are still evolving and which is better than the other will be tested over time.

The FSLRC has recommended this third model for India with FSDC taking the role of the council. Though the commission has made a major recommendation on unification of financial sector regulators, recommending merging SEBI, FMC, IRDA and PFRDA into a new unified agency, it has fallen short of suggesting a single unified regulator, envisaging RBI to continue to be the banking sector regulator.

In this context, one could debate as to why cant RBI perform the role of a coordinating agency Indeed, the FSLRC report also mentions that it had extensive consultations with RBI, which expressed a preference for being in charge of systemic risk oversight. There are both advantages as well as disadvantages of the central bank being the keeper of financial stability. The advantage could be perhaps that RBI has a large research department, which may already be conducting some of the research and analysis envisaged for the FSDC, so that tapping into these resources may be an easier and faster way of getting things moving on this front. However, given an all-encompassing role articulated for the council of financial regulators, it is imperative that it be autonomous and independent of any specific regulator and serve primarily as a coordinating agency with clearly defined task of monitoring the entire financial system. Considering that RBI is envisioned to continue to perform the role of banking sector oversight, it might not be best suited to serve as an autonomous and single interface for stability of the entire financial system.

The idea of an overarching agency to monitor the entire financial system is appealing, but at the same time very ambitious. The transition from the current FSDC, which is a small non-statutory body inside the ministry of finance, into a full-fledged statutory coordinating agency, which is the warehouse for all financial sector data, does constant monitoring and conducts rigorous research in several areas, will truly be a daunting task. There might be resistance from different regulators to report to such a council so that the process of consensus building for implementation of these recommendations may actually be a long-winded one.

Another plausible reason why the report may in practice take considerable time to implement is that its recommendations are rather qualitative. The chapter on systemic risk is full of jargons like systemic risk, micro-prudential regulators, regulatory arbitrage, SIFIs, counter-cyclical buffers, etc. Effective monitoring and oversight of systemic risk will first require precise definitions and quantification of each of these jargons, which will involve careful thought and rigorous analysis. In this context, the FSLRC foresees a new role for the FSDC with a technically sophisticated team capable of doing intensive data analysis and research on a high-frequency basis. Building such a highly qualified team of professionals to conduct serious analysis of systemic risk might be the most formidable challenge.

Anuradha Guru is an officer of the Indian Economic Service and Prachi Mishra is a senior economist in the Office of the Chief Economic Advisor in the ministry of finance. Views are personal