The governments wheat procurement for 2012-13 crossed a record 36 million tonne (MT) on Monday. The actual lifting would increase further in the coming days as farmers, particularly in Uttar Pradesh and Rajasthan, are still bringing in their produce to mandis.

This years procurement is more than 27% higher than last years cumulative purchase of 28.3 MT from farmers by Food Corporation of India (FCI) and other agencies. Its even higher than the target of 31.8 MT set for the current year by the food ministry in consultation with states. 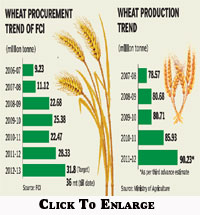 The massive procurement was supported by a bumper wheat output of 90 MT for the current year. Last year, the country produced 86.87 MT wheat. The record purchase has boosted the governments wheat stocks to over 50 MT, out of which more than 1.1 MT had been lying in the mandis because of lack of storage.

The higher contribution in MP could be attributed to an extra R100-per-quintal bonus, along with the minimum support price (MSP) of R1,285 per quintal.

We have been providing bonus to wheat farmers since the last few years and we want to become the single biggest contributor of wheat to the central pool in the next few years, chief minister Shivraj Singh Chauhan had recently told FE.

Against only 1.18 MT of wheat procured last year, Rajasthan has already purchased more than 1.7 MT thisbyear and the procurement is expected to continue till the end of this month. UP has contributed 3.6 MT of wheat against 2.6 MT in the previous year.

The procurement for the season would wind up in next two weeks, said an FCI official.

Wheat is a winter crops and is mainly grown in Punjab, Haryana, Madhya Pradesh, Uttar Pradesh and Rajasthan. The annual domestic consumption of wheat is around 76 MT.