Written by Sunil Jain | Updated: Oct 26 2010, 15:19pm hrs
Critics have panned the National Advisory Council (NAC) proposal to give subsidised foodgrains to 75% of the population on various grounds, that it will increase expenditure (by around Rs 23,231 crore going by NAC member Narendra Jadhav), that nothing has been done to actually identify the poor, and so onif the bottom 40% in urban areas are to get subsidised grain, how are we to ensure only 40% get it It has to be said that, had the original universalisation of PDS proposal been cleared, there would have been no identification problem!

The real problem, however, is different. How does any government justify giving a preferential treatment to 75% of the population Preferential treatment, by definition, has to be given to a small minority, Scheduled Tribes for instance, to allow it to make up for being so much behind the average. But if 75% of the population is seen to be requiring a subsidy, there is a serious problem somewhere. And, of course, the implicit belief that India isnt really doing as well as the GDP numbers, or the consumerism, suggestits back to the old Congresss India Whining versus the BJPs India Shining. Coincidentally, the NACs subsidy for 75% of the population is very close to the late Arjun Senguptas claim that 77% of the population remained vulnerable, given its extremely low levels of consumptionso India now has an official poverty ratio of 27.5%, a Tendulkar poverty ratio of 37.2%, an Arjun Sengupta vulnerability ratio of 77% and a NAC deserving ratio of 75%.

So who are the new poor and how rich are they Theres no point looking at National Sample Survey data, as Sengupta did, since that doesnt capture more than half the consumption in the country. Its best to look at NCAER data as thats the only income survey in the country, the NSS captures expenditure. If you take the top 75% of the population, this includes persons whose annual household income is as high as Rs 65,235 (the fourth quintile of the population)this is 1.5 times the average income of those in the previous quintile or those lying between the 40% and 60% mark, more than three times that of the poorest fourth (the first quintile) of the population. 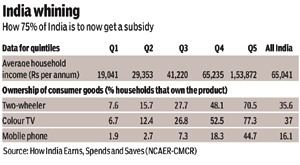 Things get even more ridiculous when you dissect the data a bit more. Ninety per cent of the rural population, the NAC says, deserve to get this food subsidy. That means, even people in the top-most quintile will be entitled to get subsidised grain in rural areas. So households in rural India that earn even Rs 1,38,427 per annum (thats the income of the topmost rural quintile) will be entitled to this subsidy! By contrast, since the urban subsidy is to be restricted to the bottom 40%, the highest urban household income that entitles you to a subsidy is Rs 30,051 (thats the average income of the second quintile in urban India). Many of the NAC members, a bit like Rip van Winkle, appeared to have been sleeping while rural Indias prosperity shot up.

Hopefully, when the NAC proposal comes to the Cabinet, some of its members will be awake.