UP to call fresh bids for 6 sugar mills

Written by Deepa Jainani | Lucknow | Updated: Jul 29 2010, 15:11pm hrs
After successfully getting clear buyers for four out of 11 factories of the Uttar Pradesh State Sugar Corporation (UPSSCL) that were put forward for disinvestment, the Mayawati government has now embarked onto the next stage to disinvest those six factories which did not get a good response in the last round.

Of these six mills, three had received single bids and the remaining 3 mills had not been able to match up to the state governments expected value.

This two stage competitive bidding process under SCM has been termed as Fresh Bidding Process. 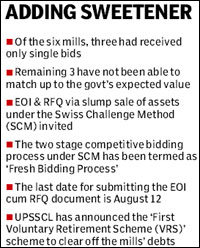 It may be mentioned that the sugar mills that received bids more than the four sugar mills that have found clean buyers are Siswabazar, Jarwal Road, Chandpur and Amroha. While the Indian Potash Ltd (IPL) has successfully bid for the first two mills, Chandpur has gone to PBS and Amroha to Wave Industries.

In fact, after completing the bid process, the UPSSCL has now embarked onto the next stage of disinvestment in the sugar sector and announced the First Voluntary Retirement Scheme (VRS) scheme to clear off the mills debts and pass them to the new buyer sans any liabilities.