Written by Rituparna Bhuyan | New Delhi | Updated: Nov 24 2009, 08:18am hrs
Despite Prime Minister Manmohan Singhs expression of confidence on Monday in the US capacity to bounce back from economic turmoil, latest data suggests it is no longer Indias top export destination, yielding the position to the United Arab Emirates (UAE) in 2008-09.

Worse, the demand for Made-in-India merchandise in the worlds largest economy continues to shrinkexports from India to the US dropped by 18.7% in the first six months of this financial year to $10.44 billion, compared with $12.84 billion in the same period last year.

Even as US President Barrack Obama and Singh are expected to deepen bilateral economic engagement, any sustainable improvement in the lot of Indian exporters will still hinge on US demand picking up. Though India is trying to tap new markets like Latin America to keep export registers ringing, gaining a meaningful foothold is expected to take at least two years.

While the US was Indias biggest export destination until 2007-08, the emergence of oil-rich UAE as the biggest buyer of Indian goods, according to disaggregated data now available with the commerce ministry, is primarily because of a paradigm shift in the gems & jewellery business. 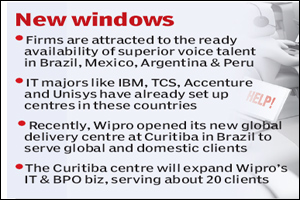 While the US withdrew benefits for Indian gems exporters under the Generalised System of Preferences regime last year, Dubai has emerged a major trading hub for diamonds polished in India. So, gems exports to the UAE more than doubled to over $10 billion in 2008-09, while exports to the US declined marginally to about $5 billion. Traditionally, the sector has had the highest share in Indias export basket to these two countries.

A majority of the exports to the UAE, mainly comprising diamonds, is for trading and does not involve much value addition, Vasant Mehta, chairman of the Gems & Jewellery Export Council, told FE.

Historically, the US has been the top destination for Indian goods, while the UAE and China have been inching ahead over the past five years.

According to experts, the US is unlikely to regain the level of consumption seen in the near past and, hence, the growth of exports to that nation will remain subdued.

The new trade policy recognises the fact that consumers in emerging economies of the Middle East, Latin America and Southeast Asia will play a bigger role in determining the growth of exports from the country, said Sonal Varma, vice-president and India economist at Nomura.

Apart from gems & jewellery, other top exports to the US comprise readymade garments, machinery, drugs and pharmaceuticals, and metal products. As for the UAE, petroleum products occupy second position after jewellery & precious stones, followed by metal products, machinery and basmati rice.

There are new entrants to the top five destinations for Indian goods as well. Hong Kong has replaced the UK as the fifth largest. Exports to the former British colony in 2008-09 stood at $6.6 billion, which is a rise of 5.6% over the previous year.

China and Singapore retain third and fourth places. China held its position despite a decline of 14.4% in exports to the neighbouring country, which stood at $9.3 billion.