The other side of cheap oil

Conventional logic has it that low oil prices are good for India as, apart from lowering inflation for both consumers and industry, they also lower fiscal and trade deficits. However, it turns out the relationship is not quite as simple and higher oil prices actually improve Indias balance of payments. Which is why though the price of Brent crude is down by around 27% from its peak earlier this year, the rupee actually depreciated 17% and the Sensex is down 7%. 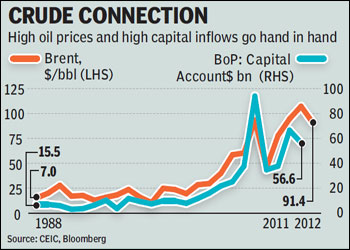 Over the past two decades, and we could go back further, as global oil prices have risen, Indias capital account inflows have risen (see chart). While individual flows, like that from foreign institutional investors (FIIs) and banking capital (but not foreign direct investment or FDI), show a lot more volatility, the relationship is largely similar. The reason is simple: the same 'risk on' forces that makes investors flock to oil and raises oil prices favour an increase in FII and other such flows.

When oil prices halved in 2008, banking capital inflows turned negative $3.3 billion and for the next three years, they rose in tandem with oil prices.

FDI, understandably, doesnt have as close a relationship, but there have been periods of high oil prices and FDI rising when oil prices rose from $60.90 to $93.90, FDI rose from $22.7 billion to $34.7 billion but it rose further the next year to $41.7 billion while oil prices halved, and it fell to $33.1 billion in 2009 while oil prices rose by 50%. Since FDI isnt hot money and is more related to GDP prospects, the link to oil prices has to be through GDP and, by and large, the oil-to-GDP relationship is weak this could either be due to increasing energy efficiency negating the impact of higher GDP prices or it could be due to the government, directly or indirectly, absorbing the impact of oil prices so you dont get to know the real picture.