As many as 50 of the 57 captive coal blocks allocated to private firms, which are at the centre of a row over a damning CAG report, havent yet got various other statutory clearances. Coal minister Sriprakash Jaiswal cited this and the fact that 20 of these blocks that were allocated between 2004 and 2009 subsequently fell in the environment ministrys no-go area for coal mining (now largely subsumed in the inviolate area category) to drive home the point that the CAGs attribution of windfall gains of R1.86 lakh crore to these firms was unjustified.

Addressing a press conference, Jaiswal also sought to turn the tables on the Opposition, which has been insisting on the Prime Ministers resignation owning moral responsibility for the scam, saying that the auction route could not be adopted for allocation of these blocks because of strong opposition from five states Rajasthan, Chhattisgarh, Jharkhand, Orissa and West Bengal. All of these states, he noted, were ruled by non-Congress parties in 2005 when many of these allocations were made. Source said Prime Minister Manmohan Singh was planning to make a similar statement in Parliament on Wednesday, before the BJP-led opposition forced the adjournment of both Houses.

The BJP does not have any moral authority to seek the PMs resignation. It should first seek the resignation of the chief ministers of BJP-ruled states against whom the CAG has made adverse observations, Jaiswal said. 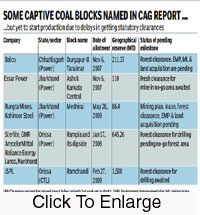 The CAG report was critical of the governments failure to adopt the auction route, which the auditor says was recommended by the then coal secretary in 2004 and could have reduced the windfall gains accruing to companies.

The CAG report, however, noted that production has commenced in only one of the 57 blocks, allegedly allocated in a non-transparent manner by a screening committee comprising many central ministries and the states concerned.

Clearances are also pending in a few captive coal mining blocks offered to companies way back in 1998 and subsequent years that haves not been captured by the CAG in its report. Though it is the responsibility of the companies to get all necessary clearance after the allocation, they are not penalised for delays beyond their control.

Sources said 50 blocks are yet to get permissions ranging from forest clearance, environmental clearance and land acquisition. In a few projects mine plans are also yet to be approved and leases havent been offered to the companies pending an official nod.

Where is the question of windfall gains when blocks are yet to start production How do you correctly assess the reserve of the mine and calculate the loss for the exchequer or gain for the company for these blocks If the auditor thinks that companies made windfall gains from allocations, then these blocks should have been under production, Jaiswal said. He said that auction of captive coal blocks will begin by the end of the year. An independent consultant, Crisil, has been asked to suggest how this policy should be implemented and its report is expected soon.

It is okay for the CAG to do its calculation on notional loss to the exchequer due to government policies but they should have also addressed the issue of enormous delays in giving clearances. This robs the country of the benefits accruing from the timely completion of a project, said a private sector power producer, who asked not to be named.

As per the policy, production from captive blocks has to commence within 36 months (42 months in case the area is in forest land) of the date of allocation in open cast mines and in 48 months (54 months in case the area fall under forest land) from the date of allocation in the case of underground mines. In this period the block holders are expected to get all clearances and commerce production for use in their respective industries.

This schedule has not been met by a host of companies such as ArcelorMittal India and GVK Power (they jointly own coal blocks), the RPG Groups CESC, Jindal Steel & Power, Gagan Sponge Iron, SKS Ispat and Chhattisgarh Mineral Development Corporation, among others. Some of these companies have already been issued show-cause notices by the coal ministry for the delays. We are constantly maintaining pressure on the companies where we find that there is wilful delay in bringing the block under production, said a ministry official.

Since 1993, 216 coal blocks have be allocated to eligible public and private companies (into power, steel and cement production) under the Coal Mines (Nationalisation) Act, 1973. Out of these, 24 coal blocks have been deallocated for not bringing the blocks under production within a specified period of time. So the net captive blocks at present stands at about 197 blocks with 50 billion tonnes of reserves. However, so far only about 28 such blocks have started production and are mining just over 30 million tonnes of coal against potential of over 200 million tonnes. The government feels that this level of production could be best achieved by Coal India.