Smartphone with the slim factor

Written by Vishal Mathur | Updated: Jul 29 2010, 15:12pm hrs
I never thought I would ever put money down to buy a touchscreen phone. I am used to, and extremely comfortable using phones with a physical keypad. And this was a solid thought even after reviewing touchscreen phones by the dozen.

And then came the HTC Legend and I bought it. I had been quite impressed with the HTC HD2 which we reviewed recently, and with that came a realisation that the year 2010 has seen a new beginning for HTC, both in terms of the quality of the phones as well as the excitement they generate in the market, thanks largely to Android OS.

The Legend is actually the Heros senior cousin, with a relatively similar shape. However, the finish and the performance of the Legend is much better than the Hero, which despite its efforts, left us with a feeling that something was missing. Straight out of the box, the HTC Legend will impress you with the aluminum build and the extremely slim form factor. The 3.2 inch AMOLED screen is capacitive in nature and is flanked with four buttonshome, menu, return and search, under the screen. However, what is not often seen on touchscreen phones is an optical trackpad, and the Legend has one.

The phone is quite slim and feels solid to hold. The battery and slim slot can be accessed on the back by sliding out a part of the panel at the base. The entire back panel of the Legend does not open up, which is a good thing, Slide in the battery, SIM card and the memory card, lock the plastic cover and slide back the panel. Switch on the phone, and it takes about 40 seconds to become usable with the HTC Sense user interface (UI) fully loaded and active. The Sense UI is a bit different from what I saw in the HD2, but does a similar job of providing a shell for the Android 2.1 OS in it did for the Windows Mobile 6.5 in the HD2. 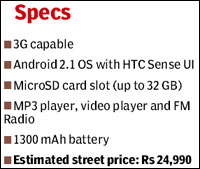 The Sense UI comes with a set of 7 fully customisable screens, which can be set to have the content you want. I have utilised them for weather updates, some app shortcuts, favorite contacts, messages, music calender and twitter. You can put whatever content you want on the 7 screens. This latest Sense UI has the pinch to view capability on any of the 7 screens, you can just do a pinch movement on the screen and all 7 screens show up as thumbnails.

The touchscreen quality is excellent. Touch receives an immediate response, and the fluidity of the motion is superb. The AMOLED display is quite bright and vivid that I had to set the brightness to about just 30%. Ordered the Legend to set a high definition image as the wallpaper, and it scaled it down perfectly to be visible across all 7 screen and scrolls to make a different part of the wallpaper visible across all screens. Android 2.1, unlike Windows Mobile 6.5, is quite a good OS to use, even on its ownwithout the Sense UI. The menu is simple, uncluttered and yet has a lot of content.

A couple of very interesting features come built in with the Legend. First, when the phone rings, the ringtone rings at the volume you have set it at. However, when you pick it up, the ringtone gradually reduces the volume and is completely silent after a while, irrespective of whether you want to pick up the phone or not! Another feature is the flip to silent feature. An incoming call rings, you dont want to pick it up. Just turn the phone upside down. It becomes silent!

Android Marketplace, is perhaps the biggest positive for the Legend. With literally a million apps available to download, there are no boundaries to the extra features and capabilities your phone be loaded with. Google apps come preloaded in the phone, which means that you are connected to Gmail and Gtalk whenever you want to be. Also, the Legend came preloaded with peep for Twitter, Quickoffice, Facebook, Footprints, and a Stock and news updater.

However, like all brilliant things, the Legend is not without faults. You cannot access anything except the Web browser on Vodafone Live, which I happened to be using. This means that Gmail, Gtalk, Twitter and Facebook were out of reach. With the 600 MHz processor, 3.2 inch screen and all the constant data usage to keep you connected to the online world, the battery does take a beating. From full charge to full discharge, the battery will last anywhere between 1 and 2 days, depending on your usage pattern.

Overall, I am extremely impressed with the HTC Legend. Which is probably why I bought one! However, without bias, the phone is extremely goodtouch, speed, interface quality, build and the screen displayare all worth the moolah. The Android 2.1 will soon receive the Android 2.2 update from HTC. Even now, the phone is quite a good purchase option, for those who want to spend less than Rs 30k on a touchscreen phone.