The order validated a January 28 transaction between Srei and DPSC shareholders, which was challenged by the discoms largest shareholder, Descon, and the trade union wing of Mamata Banerjee-led Trinamool Congress.

Disinvestment in DPSC was held up for several months due to strident opposition by Trinamool, which is believed to have led to a policy flip-flop at the Centre as well. Observers have cited this as reflective of the impediments that invariably come in the way of any reform initiative in the Left Front-ruled state.

The apex court, however, directed Orbis Power Venturesa special purpose vehicle of Srei Group and Indian Power Companyto make an open offer for the shares acquired by it in DPSC Ltd (formerly Dishergarh Power Supply Corporation) according to Sebis takeover code and also comply with the terms and conditions of the auction.

The Srei-IPC consortium at present holds around 8% in DPSC, which is listed on the Calcutta Stock Exchange and NSE.

The consortium had emerged the highest bidder in an auction held last November 20 to buy DPSC by agreeing to pay Rs 710 a share, outbidding DPSCs largest shareholder Descon Ltd, which had offered Rs 705 a share. 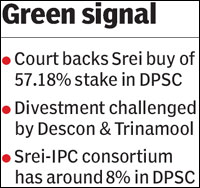 A bench headed by Justice SH Kapadia rejected both the petitions filed by Descon Ltd and the Trinamool Congress challenging the Calcutta High Court judgement that confirmed divestment in the firm.

The court refused to interfere after a statement by senior counsel Ashok Desai and Ajay Bhargava, appearing for Orbis, that the SPV would make a public offer within the stipulated time in keeping with the Sebi (Substantial Acquisition of Shares & Takeovers) Regulations, 1997. Desai also offered to buy Descons 32.20% shares in the discom, set up in 1919.

Descon senior counsels R Nariman and Rana Mukherjee argued that the Centres policy to disinvest the shares of insurers LIC and United India Insurance Company was not finalised and was, rather, being considered by the competent authority.

The orders from which the instant petition arises thus interfere with the policymaking powers of the Central government and specifically enforces a draft share purchase agreement for sale of shares not yet signed or approved or finalised by the Central government, Descon alleged in its appeal.

The DPSC stake sale was expedited after the high court order. The three public sector shareholdersLIC and GIC and sick firm Andrew Yule transferred DPSCs shares to the Srei consortium and received pay orders in return for 24,20,455 equity shares on Thursday as ordered by the high court on January 19.

DPSC owns around 200 acre of land and is believed to have approvals to set up a 500-mw power plant. The discom has two power generating stations, Chinakuri and Dishergarh, which supply 125 mw of power in an industrial belt in West Bengal and Jharkhand.