Written by Gireesh Chandra Prasad | Gireesh Chandra Prasad | New Delhi | Updated: Dec 31 2009, 06:07am hrs
Drug majors have asked the government to be more predictable in the way it imposes price control on brands that are normally outside the government's direct price control and account for four-fifth of the over Rs 50,000 crore domestic market.

Pharma firms including Ranbaxy recently told the government to change the way it identifies pharmaceutical brands for imposing price control when they become unreasonably costly.

Producers want the government to take into account the price fluctuations of a product either in a calendar year or in a financial year instead of taking into account changes in any consecutive 12 months. Drug price regulator National Pharmaceutical Pricing Authority (NPPA) fixes the price of any brand in public interest if it becomes costlier by more than 10% in any consecutive 12 months.

Companies have also told the government that whenever it invokes the public interest clause in response to unreasonable price rise of one brand, it should apply price control to all competing brands of the same medicine. Otherwise, the producers that diligently managed the successive price increases in such a way that they do not breach the 10% barrier in any consecutive 12 months, will get away, while companies that kept prices steady for a long time before raising them in one go will get penalised, said a person privy to the development.

In some cases, the brand which got a sudden price rise of more than 10% in a year may still be cheaper than the competing brands that did not get caught in this net. In such cases, public interest is not served by targeting only one brand of a class of drug, producers told the government. 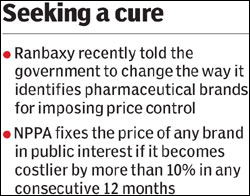 So far, NPPA fixed the prices of 27 brands that are normally outside price control, while companies voluntarily reduced prices of 62 brands when the regulator took up price rise of these brands with the companies, NPPA chairman SM Jharwal told FE in a recent interview.

Ranbaxy made a case before the government to reverse the price fixation of its brand Cilanem 500 mg injection that kills a wide variety of bacteria by interfering with their ability to form cell walls. Some of the other brands which were price-fixed by the regulator include certain specific strengths of Lupin's anti-peptic ulcer drug Rablet Vial, Nicholas Piramal's anti-allergy drug Phenargan Elixir, Novartis India's anti-bacterial drug Urclar Film C and GlaxoSmithKline's anti-inflammatory drug Tenovate-GN. The firms that reduced prices when the regulator took up the matter with them include J B Chemicals & Pharmaceutical Ltd, Cadila Pharma, Emcure, Torrent Pharma and IPCA Labs.

The NPPA entertains requests to change the prices of drugs once fixed only if the producer first reduces the price within a fortnight as ordered. The government is of the view that the flexibility in assessing price fluctuation in any given 12 month period helps the consumer as it always prevents sharp price increases. Also, the law authorises it to fix prices of select brands and not the entire class of a specific medicine.