Written by P Vinod Kumar | Chennai | Updated: Jan 29 2011, 08:43am hrs
The worries of real estate companies seem far from over as foreign investors flee the sector and most analyst turn bearish on fears of further rate hikes.

Most realty stocks on Friday got battered as investors cut exposure to the sector. The rate-sensitive BSE Realty index on Friday declined about 5% to 2,397, a 20-month low. Heavyweights scrips, DLF, Unitech, Indiabulls and HDIL, who together account for 74% of the index weightage, lost anywhere between 3% and 10%.

The analysis of shareholding pattern over the last two quarters reveals that foreign institutional investors (FIIs) have been paring their exposure to the sector.

FIIs have reduced their holding in 11of the 15 stocks on the BSE Realty index between the September and December quarter of 2010.

Indiabulls Real Estate has witnessed the maximum exodus with FIIs paring their stake from 63.8% to 56.8%, down by 7 percentage points. Other realty majors like Ackruti City, Anant Raj Industries, DB Realty, DLF and Unitech have all seen reduction of shareholding by FIIs.

Most fund houses and brokerages had re-rated the sector on fears of an impending bubble fuelled by asset-price inflation and tight cash flow to the sector. Domestic lenders and institutions have become wary of taking exposure to the sector fearing delinquencies. 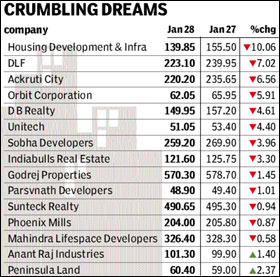 Promoters of most of the real estate companies have been forced to pledge chunk of their stake to raise money at competitive rates from commercial banks and other lenders. To make matters worse, real estate prices have peaked leading to a lull in demand with prospective buyers finding it difficult to raise finances.

Meanwhile, only HDIL, Mahindra Lifespace, Parsvnath Developers and Sobha Developers have seen FIIs upping their stake, albeit marginally, on a sequential basis between the past two quarters.