Re heads for biggest fall in Jan since 1996

Written by fe Bureau | New Delhi | Updated: Jan 29 2011, 08:55am hrs
The rupee likely to post biggest decline for January since 1996, following a slide in stocks, strong demand for the dollar by oil importing companies and lacklustre interest from foreign investors.

A falling rupee raises the countrys import bill and makes it less attractive for foreing investors to buy Indian stocks. It helps exporters to an extent as lower rupee makes exports cheaper. However, the actual benefit comes if the decline in rupee is higher when compared to the price of currencies of competitor countries.

Foreign funds were net sellers of more than $1.06 billion worth of shares this month until Thursday pushing the rupee down over 2%. Last year, investments had reached a record $29.3 billion helping the unit to gain 4.1%. The Sensex on Friday tumbled by 288.46 points or 1.54%. In three straight sessions of sell-off it lost 755.31 points or 3.94%.

Forex dealers said that month-end dollar demand from importers, mainly oil refiners, to meet their monthly requirements, aided the rupee downtrend. Capital outflows too weighed heavy on the rupee sentiment. Dealers expect the rupee to remain in a bear grip for the next few months on likely negative stocks. 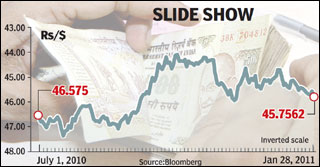 Even as the Rupee declines, rising interest rates in the economy have pushed up yields on the government securities. Government bonds lost 0.4% this month, the fourth-worst performance among 10 local-currency debt markets outside Japan, according to indexes compiled by London-based HSBC Holdings.

Still, foreign investors pumped in $19.8 billion as of January 24 in the government and corporate debt, according to Sebi data. Another reason rupee is losing support could be the delay in expected share sales of state-owned companies, which usually attracts substantial foreign investment.